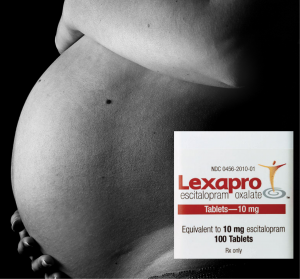 Lexapro (escitalopram) along with other SSRI’s may be linked to increasing rates of birth defects amongst children whose mother took the drug during their pregnancy. Your child may be entitled to monetary compensation birth defects were caused by the taking of Lexipro or other SSRI medication. If you have any further questions regarding litigation of claims against manufacturers of Lexipro for infant defects or other serious adverse drug side effects contact our Law Offices. (855)385-2529

Heart Defects Caused by Lexipro and other SSRI medications

According various international studies SSRI medication including Lexipro may be linked to increasing rated of congenital heart defects in infants the most common of which is Atrial Septal Defects (ASD). Most children with considerable Atrial Septal Defects can be diagnosed in the womb with the use of ultrasound and ultrasonogrophy.  Other serious congenital heart defects and heart issues which may be cause by the taking of SSRI’s during pregnancy include, Hypoplastic Right Heart Syndrome, Hypoplastic Left Heart Syndrome, Pulmonary hypertension and Artesia, Heart murmurs, Patent Ductus Arteriosus (PDA), and Defective heart valves.

Risk Factors: Children are at the greatest risk of contracting congenital heart defects sue to their mother use of Lexipro and other Anti-depressant medication during the firth trimester of pregnancy.

Always Speak to you Physician First: If you are taking Lexapro during your pregnancy it is important to speak to your medical doctors before you make any decisions regarding the stoppage or reduction of Lexipro or any medication you are on.

Other Significant Birth Defects Cause By the taking of Lexipro During Pregnancy:

There are numerous adverse birth defects present in children whose mothers took Lexipro during pregnancy. Some of the potential defects by the use of Lexipro are as follows.

Visit these page to learn more about dangerous side effects cause by the use of Lexipro and other Antidepressants New England Journal of Medicine: Use of Selective Serotonin-Reuptake Inhibitors in Pregnancy and the Risk of Birth Defects Food and Drug Administration: FDA Warning on Lexapro and increasing rate of heart and Lung Defects

Claims for injuries caused by defective prescription drug medications can be challenging requiring expert legal representation in the fields of product liability litigation and defective pharmaceutical claims. A key feature in a successful defective drug claim is to prove a defect existed at the time of sale to the general public. Generally there are three ways a plaintiff attorney representing victims can prove the existence of a defect.
(1) Show evidence proving the existence of a defect in the original design of the drug
(2) Show evidence proving the existence of a defect in the manufacturing of the drug so that the manufactured drug is markedly different and more dangerous the intended original design.
(3) Defective in the Labeling of the Drug: In other words a failure to warn the public of the known dangers associated with its use.

Downtown LA Law Group Is a National Drug Defect Law Firm based in Los Angeles California. If you have any further questions and would like to speak to one of our attorneys regarding your legal rights call (855) 339-8879