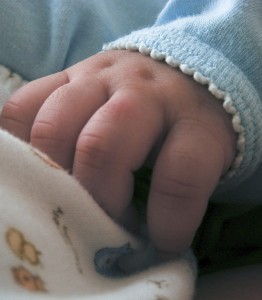 Klumpke Palsy is a specific type of brachial plexus birth injury where certain vertebra of the spinal cord are sustain damage. In many instances Klumpke Palsy is caused by the medical malpractice and or negligence patient care of the practicing physician and nurses during the delivery process. Your child is entitled to compensation for nerve damaged sustained from Klumpke Palsy.  Contact our Birth Injury Medical Malpractice Law Firm to learn more about your child’s right to recovery.

There are essentially three degrees Klumpke palsy which can effect a newborn child.

One of the most common causes of Kumpke’s Palsy on newborns is the medical negligence of the practicing physician, nurse or midwife during the delivery process. All too often individuals assisting the birthing process fail to recognize the presence of shoulder dystocia (when the shoulders of the child become lodged behind the pubic bone of the pregnant mother). Some common danger signs associated with shoulder dystocia which the practicing physician should be aware of during the delivery process include, large size of the child, prolonged labor, overweight mother, advanced maternal age, and diabetes in the mother. Instead to taking preventative measure in dislodging the child the practicing doctor will pull on the head of the fetus resulting in the stretching of the shoulder neck and upper back regions resulting in damage to the surrounding nerves and spinal column.

After the birth of a child the nurse practitioner is charged with the responsibility of testing the general heath of the newborn including testing for motor factions. In instance nurse in hospitals will attempt to downplay the magnitude of the harm your child has sustained during delivery. In many hospitals will fail to inform parent of the injuries caused by the medical malpractice of the obstetrician. In such instances it is vital to understand the common sign and symptoms associated with Klumpke Palsy. Some signs and symptoms of Klumpke Palsy are as follows

The Medical Malpractice attorneys at the Downtown LA Law Group have the experience and dedication required to review and analysis your case and determine the best legal course of action do that your child can be fully compensated for the injuries suffered during the delivery process.