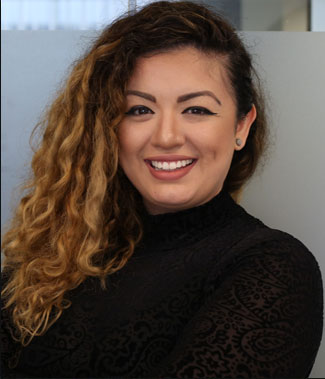 Amy Gomez has always wanted to make a difference in people’s lives. As a child, her mother would often bring to the convalescent home where she worked; she realized the patients enjoyed having the joyful presence of a child around, and Amy loved keeping them company and talking to them. A graduate of Le Cordon Bleu, her initial impact was through her position as a pastry sous chef — introducing people to culinary delicacies. But she soon realized that it was a job that did not give her much fulfillment. She still wanted to make a positive impact on people’s lives, but that meant embarking on a new career path. She remembered the sense of purpose that came with working directly with people in the convalescent home, and so she started to work as a medical translator for a workers’ compensation orthopedic doctor. It was here that she witnessed first-hand how poorly represented injured workers were. They were needlessly suffering due to a lack of direction and inability to properly express their pain which, in turn, led to a lack of proper treatment. The frustration that came with the inability to help those unable to help themselves led Amy to the legal field. Amy didn’t want her education to be based on a generic curriculum so she took the long path. She became a well-rounded case manager while working alongside some of the most brilliant minds in the industry. She took medical courses in radiology, anatomy, and kinesiology, all the meanwhile taking paralegal courses at Los Angeles city College. She is currently preparing to attend law school. Her personal connection with her clients drives her, so that she one day can fight for her clients every step of the way until they are properly compensated for their damages.

Today, she works as a manager at Downtown LA Law group. She feels a sense of purpose and it drives her to lead the new generation of case managers in their pursuit of assisting injured people who don’t have the knowledge, experience, or guidance to navigate the legal claim process. She prides herself in teaching her philosophy that the best way in helping others is by treating them like people. It is a simple concept that many firms forget: Every case is a person, not just a number.

The information on this website is for general information purposes only. Nothing on this site should be taken as legal advice for any individual case or situation. This information is not intended to create, and receipt or viewing does not constitute, an attorney-client relationship.
© All Rights Reserved
Follow us