Can A Nursing Home be Sued for Abandonment of Elderly Resident

The aging of the population had resulted in an influx on elderly residents in nursing home and long term care facilities across the county. The result has been an increased risk of acts of violence and elder abuse by nursing home staff against residents. Abandonment is the act of abandoning a person over the age of 65 or a person between the ages of 18 and 65 who is not able to take care themselves without a justified reason resulting in an increased risk of physical and psychological harm. Though abandonment and isolation of the elderly in nursing homes does not receive as much attention as other cases of elder abuse its can cause serious harm both physically and emotionally. Elderly individuals who are willfully abandoned can suffer from a myriad of health issues including

State and Federal Laws for Protection of the Elderly Against Forced Isolation and Abandonment: 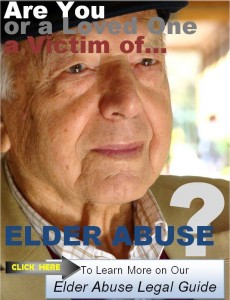 Over the past several year state legislatures have passed strict laws meant to protect the human right and dignity of senior citizens.

– Legal Definition of Elder Abuse – Nursing Home Medical Malpractice Lawsuits – Can you sue a Nursing Home – Physical abuse by residents of nursing homes – Sue nursing home for elderly financial abuse – Elder Abuse Statistics – Nursing Home Class Action Lawsuit – Nursing Home Restraints Lawsuit – Nursing Home Falls Lawsuit – Spider Bites in Nursing Home – Nursing Home Isolation Lawsuit – Caregiver Neglect Attorney – Elder Abuse Reporting Laws Legal Definition of Abandonment Cal. Pen Code 15610.05: California Penal code defines abandonment of the elderly as, “the desertion or willful forsaking of an elder or a dependent adult by anyone having care or custody of that person under circumstances in which a reasonable person would continue to provide care and custody. Cases of Elder Abandonment Should Be Reported to Proper Agencies: For example the state of California recently expanded the breadth of its elder abuse laws and now mandates certain individuals to report known and suspected cases of elder abuse which also included cases of abandonment, isolation and neglect. Filing a Lawsuit: Abandonment of the elderly is considered elder abuse under the eyes of federal and state laws. Victims of elder abuse have the right to seek compensation from at fault parties including nursing home staff, employees, operators and owners. If your loved one or someone you know has suffered from a case abandonment or isolation contact our elder abuse legal center by calling toll free (888) 649-7166. All consultations with one of our qualified attorneys are free of charge and completely confidential.

“Farid was great! My boyfriend and I retained him in April 2017, as we were rear ended on the I101 . Our car was totaled and we were badly injured. On a family member’s recommendation, we took a chance and contacted Farid for help with the process. After the whole ordeal, the last thing we wanted to do was deal with insurance companies.”
– Alicia McIntosh
5/ 5