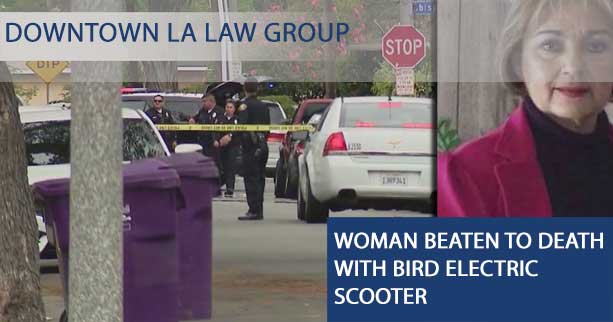 On Monday, May 13, 2019, a woman was beat to death in Long Beach. The incident was reported at approximately 12:30 p.m. According to reports, the victim – who was identified as 63-year-old Rosa Manjarrez de Hernandez – was walking from a relative’s home to her home. The distance would have been approximately three-blocks, three-blocks that the victim likely walked many times before. The woman was walking down the street when a man, who has since been arrested, began attacking her. The man punched her, pushed her, and kicked her, until she eventually fell down. The man then found a Bird scooter, with which he used to beat her on the head. The attack was captured on surveillance video, which has since been taken for evaluation by authorities. The woman was pronounced dead on the scene. The man was arrested a few hours after the attack at a convenient store. He was identified as Amad Rashad Redding, 27, of Long Beach, California. Bird released a statement after this unfortunate event. They expressed their condolences and stated that they will work with law enforcement to help with the investigation in any way.

The Legal Aspect of this Fatal Assault

When someone maliciously and negligently attacks another party, leading to injury or death, the victim or surviving family members could pursue claims against the party liable for the harm suffered. In general, victims and affected family members could pursue injury claims or wrongful death claims, depending on the specific details of the incident. However, a Bird scooter was involved in the fatal incident. Could Bird be liable for the death of the woman in any way? So far, there is no evidence that points to the attacker being a Bird rider in any way. The attacker likely grabbed the first thing that he saw that could be used as a weapon against the victim. The electric scooter company probably never even considered the possibility that the electric scooters could be used as a weapon. Bird likely never even considered the possibility that their scooters could be used in such a malicious way. Could Bird be liable for the incident that led to the tragic death of Rosa Manjarrez? An aggressive attorney might be able to hold Bird at least partially accountable for the fatal incident described above. If not found directly at-fault, Bird might be found indirectly at-fault for failing to take preventative actions. More specifically, a second incident involving a Bird scooter used as a deadly weapon could quickly result in Bird being liable – after failing to take action even once aware of the possibility that their scooters could be used as weapons.

What Could Bird and Other Scooter-Share Companies Do?

Bird and other scooter-share companies cannot control the actions of random people on the street; these companies can’t even control the actions of their riders. However, Bird and all other scooter-share companies have the power to control their business, and how their scooters are available in the public and to the public. These scooter-share companies have been set up since their start in a way that is convenient to riders. These scooters are freely available in specific areas. Anyone with the right app could unlock and use the device. In fact, anyone could take the scooter to use even without properly going through the apps. Although this system has been convenient to riders (and to people who have found ways to exploit the accessibility to these scooters), the system proved to be fatal in the incident above.

– The Ultimate Guide to Scooter Accidents

What could be done differently? Could Bird and other scooter-share companies change the way that their scooters are available to riders? Consider some of the rental bicycle services available throughout Los Angeles and surrounding areas. One rental bicycle service in particular implemented a docking system. The bicycles are physically locked to the docking system. Anyone wanting to use the bicycles must go through a quick process to be able to unlock and undock the bicycle. If scooters followed the same docking strategy, only riders would be able to access the scooters. This would prevent random people on the street, such as the attacker in the incident mentioned above, from having access t the scooters. Doing something similar to this could prevent scooters from becoming quick weapons to use in random acts of violence like the fatal incident discussed above.

– Steps to take after scooter accident

The Ultimate Guide to Scooter Accidents