Each year, hundreds of innocent individuals suffer severe injuries caused by accidents involving law enforcement vehicles. Individuals that are commonly injured in such accidents include other motorists and their passengers, pedestrians, motorcycle riders, bicyclists, and innocent onlookers. Victims of auto collisions involving LAPD and other local police, sheriff, and CHP squad cars are entitled to compensation for all damages incurred. Common injuries in auto accidents involving high-speed police and law enforcement cruise chases are often severe and life-threatening. Victims may suffer from spinal cord injuries, brain injuries, nerve damage, and organ failure. If you or a loved one has suffered harm in such accidents, contact our law offices for a fully confidential and no-cost review of your case.

Recently, the Los Angeles Times newspaper found that LAPD police were involved in “1,250 crashes over the last three years — an average of about one a day.”   According to the Times, “Some [crashes] resulted in life-threatening injuries or were the result of the officer violating traffic laws, according to LAPD records.” Joel Rubin, a writer for the LA Times, further contends, “The city has paid nearly $24 million in settlements or verdicts in about 400 LAPD traffic-related lawsuits over the last nine years and must contend with dozens more cases that remain unresolved.”

If you have been involved in a police vehicle accident as a pedestrian, driver, cyclist, or motorcyclist, you should know that you have rights that will be protected by an aggressive and caring accident attorney. At Downtown LA Law Group, our Police Car Accident Lawyers will defend your rights in the court of law so that you can receive fair compensation for your injuries.

In the case that you have been injured while you were being transported or sitting in a police car, you can bring an action for the personal injuries suffered in this accident. Your settlement package will depend completely on the nature of your injuries. But you can expect to settle in the range of $75,000 to several millions of dollars for this type of accident.

Your injuries may include permanent injuries, injuries that will keep you from being able to work full time or at your regularly scheduled duties.

Accidents in cop cars, patrol cars and squad cars occur because the police officer driving is distracted or rushing to another scene of a crime. These officers can often lose control of their vehicle, or have an accident when operating the vehicle in a reckless manner. If that does occur, then the person sitting in the car will be susceptible to being injured as a result of the negligent driving.

How Long Do They Take to Payout on These Claims – Average Length of Time to Settle These Cases?

The average length of time to pay out on these types of claims are a few weeks to a few months. Most of these claims with being injured in a police car are paid out within a few month’s timeframe.

I Was Injured in An Accident – While I Was a Passenger in a Police Squad Car – What Are My Rights?

Do I Have a Claim with The Police Department for My Injuries?

I Was Injured in Police Car Accident – Can I Sue?

Yes, you can bring litigation if you were injured while riding with police in a police car. You have the right to be transported safely when you are in a police car. If this has happened to you, just give our law office a call. We will be able to relate to your situation, and review the facts of your claim with you. We can get you the recovery compensation that you need to recover from your personal injuries.

Some of the most common injuries in police car accidents are as follows:

Police departments recently involved in high-speed collisions with other cars, pedestrians, motorcyclists, and bicyclists are as follows:

. This section outlines rules regarding governmental entities for personal injury liability and compensation for damages under state law. The California Torts Claims Act provides for a limited waiver of sovereign immunity to bring personal injury claims against the State of California, including all affiliated law enforcement agencies.

Statute of Limitations: How long do I have to bring a lawsuit against a Police Department or California Highway Patrol?

In the State of California, claims against public entities need to be filed within 180 days, or six months, from the date of the incidents. If and when the claim is denied by the agency, the victim will have two years from the original date of the incident to file a claim in civil court. Note: A claim against a state of federal agency must first be filed with the agency before it can be pursued in civil court. In some cases, courts have allowed for an exception to the filing deadlines. Some of the most common exceptions include the plaintiff being under the age of 18, mental incapacitation, or physical incapacitation of the victim.

Victims of personal injury, including those involved in police cruise and law enforcement vehicle accidents, are entitled to full and just compensation for all their damages, including recovery for all medical and health related expenses, pain and suffering, lost wages, loss of future earning capacity, rehabilitation, and nursing home costs. 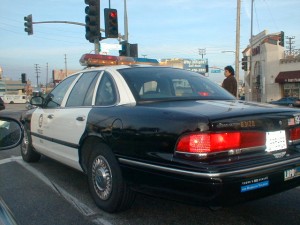 Filing a Lawsuit against the Los Angeles Police Department or any other California Police Department can be a difficult process.  If you have been injured by a Los Angeles Police Department officer in a high-speed chase or any other accident involving a squad car, we will help you fight for the maximum compensation you are entitled to. Contact our attorneys at (855) DTLALAW for a free consultation and review of your case. If your injuries prevent you from visiting our law office, our team will happily visit you at a place of your convenience upon your request.