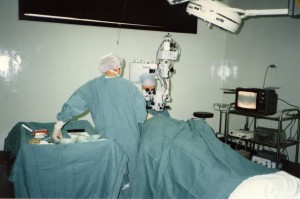 Laparoscopy or laparoscopic surgery is an operation that enables doctors and medical professionals to perform minor and major surgeries in the abdomen or pelvis with the use of a specialized camera.  The procedure is performed using a laparoscope, which is a one half inch thick fiber optic rod with a video camera attached.  This laparoscope is inserted into the body, usually through the belly button or vagina, and allows the physician to see the areas through a video monitor located in the operating room.  Once inserted, a doctor can choose to perform a surgery through the laparoscopy, or use the images to diagnose a problem and conduct a normal surgery. Also referred to a “minimally invasive surgery,” laparoscopy has been hailed in medical circles as requiring less down time, smaller incisions, reduced pain and heightened access and visualization to the abdominal areas compared to traditional forms of surgery.  However, although laparoscopic surgery signifies an advancement in medical technology, the use of instrument requires a advanced level of skill and knowledge.  failure to abide by certain principles can lead to catastrophic and even fatal results for many patients. The medical malpractice attorneys at Downtown L.A. Law Group will offer free evaluations for victims and their families who have suffered injuries as a result of laparoscopy malpractice.  Instances of a botched laparoscopy include:

What is Laparoscopy Used For?

Originally , laparoscopic surgery was used for gallbladder surgeries.  In this procedure, the abdomen is inflated with the use of air or carbon dioxide.  The Laparoscope is inserted at or near the belly button in order to guide the doctor in removing the gallbladder through another incision. Since its inception, and due to its popularity, laparoscopic surgeries have additionally used to perform:

Who is Liable for My Laparoscopic Injuries

Due to the widespread use of laparoscopy during surgery, hospitals and other medical facilities are forced to use medical professional who lack the necessary skill for the procedure.  This often leads to negligence or malpractice by the doctor.  Other times, the doctors fail to properly sterilize the device, leading to often devastating infections and diseases.  Also, because these procedures have quicker turnaround times, patients are often released too soon, leading to complications that otherwise would to caught in the recovery room.

Contact a Medical Malpractice Attorney for Your Laparoscopic Injuries

If you or a family member have been injured as a result of a doctor’s malpractice or negligence relating to your laparoscopic surgery, you have rights.  Our lawyers offer a free case evaluation for victims suffering from a botched laparoscopy and handle these cases on a contingency fee basis.