As of early Tuesday, divers and search crews continue the search for missing people; at least twenty-five people have been confirmed deceased. Only twenty bodies have been recovered; five bodies have been found but cannot be retrieved due to conditions that make recovery efforts risky for divers and search crews. The boat, the Conception, carried scuba divers that were on a three- day Labor Day trip. There were a total of 39 people on the boat; the Conception departed the Santa Barbara Harbor on Saturday. The boat caught fire near Santa Cruz Island off the coast of Southern California. According to reports, the Conception burst into flames before dawn (at around 3 a.m.) – the passengers were sleeping below deck at the time while five of the six crewmembers were sleeping on the top deck. 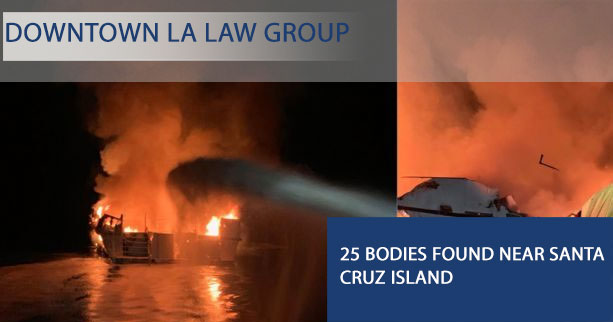 The five crew members that were sleeping on the Conception’s top deck were able to jump off and take a dinghy to safety. The crew members reached a fishing boat, the Grape Escape, and banged on the boat until they got the attention of its occupants. By this time, it was approximately 3:30 a.m. Bob and Shirley Hansen were the fishing couple that helped the surviving crew members get to safety. They have since stated that they were able to see the boat “totally engulfed in flames, from stem to stern.” They could also ‘see the fire coming through holes on the side of the boat,” and they could hear “explosions every few beats.” Apparently, at least two of the surviving crew members went back towards the fiery Conception to search for survivors – but did not find anyone. Shortly before jumping off board to safety, the crew was able to send a call for help. Eventually, a fireboat, a Coast Guard helicopter, and a TowBoatUS fast boat arrived on scene. Part of the mayday call for help has been released. The crew member on the call confirmed that the boat was engulfed in flames and that there was “no escape hatch for any of the people on board.”

This unfortunate incident has devastated the community. As search efforts continue for the nine people who are still missing, the community – as well as the family members of the deceased and the missing – has been left with many questions. The most important question, however, is the following: who is liable for all the harm caused by this unfortunate boat incident? 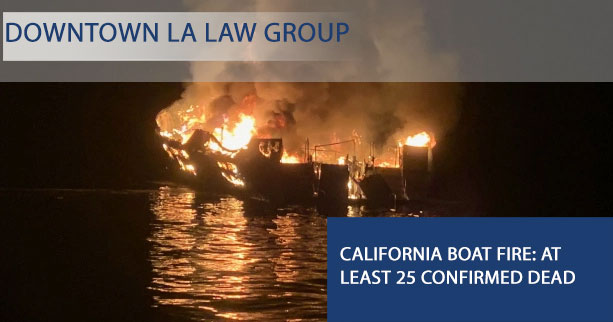 The Conception was owned by Truth Aquatics – a dive-boat company founded in 1974. Specifically, the Conception was added to Truth Aquatics’ fleet. The Reid’s, who are familiar with the Truth Aquatics fleet, claim that all three boats in which they have sailed – including the Conception – are “among the best and the safest.” They claim that the boats were always “immaculate” and that crewmembers were always thorough when reviewing safety instructions in the start of all trips including information on life jackets, exits, and fire extinguishers, for example. The Reid’s also confirmed that the below-deck sleeping area is tight – as bunk beds are stacked close together, there is only one stairway, and there is only one exit. This would mean that sleeping divers wouldn’t have been able to escape the fire and that crew members wouldn’t have been able to reach them to warn them. Safety records provided by the Coast Guard show that although there were safety violations within the last five years, they were all addressed quickly and efficiently by the owners of the boat. At least two safety violations were associated with fire safety. More specifically, a 2014 violation was in regard to a leaking fire hose, and a 2016 violation was in regard to a heat detector in the galley.

— How Much is a Cruise Ship Injury Case Worth

The cause of the fire is still unknown. However, it is possible that an issue with the boat contributed to the fire and the deaths of most of the people on board.

On boats, general negligence applies. What does this mean? Victims (and surviving family members of deceased victims) must be able to prove that the harm suffered (either injuries or death) was a direct cause of the negligent actions of a party that owed a duty of care towards the people on board the boat. To prove negligence, the following elements must exist:

If all four elements are present, injured victims and the family members of deceased victims could pursue claims (injury claims and wrongful death claims, for example).

When negligence directly leads to the harm suffered by innocent parties, affected parties could pursue claims and fight for their right to recover monetary compensation. In general, some of the compensation that could be available for recover includes the following: medical expenses, lost wages, pain and suffering, funeral and burial costs, loss of consortium, and punitive damages, for example. Although there is no guarantee of the type of compensation that claimants could recover, hiring an experienced and aggressive attorney will ensure that claimants recover the maximum amount of compensation available for their claims.

Without a doubt, the fire on the Conception resulted in devastation. The people on board were looking forward to a weekend of summer fun and never expected something so tragic to occur. If you were injured or a member of your family died as a direct result of the incident on the Conception, you might have grounds to pursue a claim against the liable parties. If you are interested in learning more about suing the liable parties and potentially recovering monetary compensation, it is important that you seek trustworthy legal assistance.

— 17 of 31 Occupants aboard Duck Boat Drown in Capsize Incident

At Downtown L.A. Law Group, we are dedicated to fighting for the rights of all affected parties. Whether you were injured or a member of your family died as a result of the tragic fire on board the Conception, you can be certain that our lawyers will fight for your rights to pursue a claim. If you would like to discuss your claim with our experts, call us today at (855) 339-8879. You could benefit from our free legal services, which include free consultations and free second opinions in which our experts will dedicate themselves to providing you with all the information necessary to either start or continue your claim. Our free legal services are available as part of our Zero-Fee guarantee that ensures that our clients are never responsible for upfront legal fees. Our firm is also based on contingency; therefore, our clients will not be responsible for any fees until after winning their claims. If you do not win, you will not be required to pay anything. If you are ready to discuss your claim with our experts, contact us immediately – we want to help you fight for your rights.