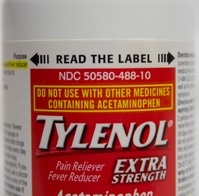 According to multiple studies conducted by independent scientific research institutions and the CDC (Center for Disease Control) the use of medications containing Acetaminophen including Tylenol has been linked to an increased risk of Liver damage including liver failure. Our law firm is currently investigation class actions and single party claims against manufacturers of Tylenol.

Legal Assistance: If you have any further legal questions feel free to contact our law firm toll free  (855) 339-8879. All legal consultations regarding your claim are offered free of charge.

Acetaminophen is one of the most commonly used over the counter (OTC) drugs sold in the United States. Acetaminophen can be found in numerous over the counter and prescription based products including Tylenol, Excedrin, and opiate based Vicodin and Percocet. Based on numerous studies establishing a causal relationship between the intake of acetaminophen and liver failure the Food and Drug Administration (FDA) established an advisory committee meeting reporting stating, “the taking of more than the recommender amount can cause liver damage ranging from abnormalities in liver function blood tests, to acute liver failure, and even death.”

Why Does Tylenol Use Lead To Liver Failure

As acetaminophen breaks down in the liver it is converted to the toxic chemical metabolite. Toxic metabolite binds with the structure of the liver resulting in protein breakdown. In a recent study the majority of acute liver failures in the United States is linked to the use of Acetaminophen medication. In reaction the FDA issues a public education campaign aimed at reducing the incidence of Tylenol over used and overdose in the United States. In 2009 the FDA issued a requirement for black box warnings regarding acute liver failure to be immediately placed in products containing acetaminophen.

Signs and Symptoms of Liver Failure Resulting from Tylenol Used

Some of the most common signs and symptoms of liver damage due to the intake of acetaminophen used or overdose are provided below. If you are experiencing any such symptoms seek medical attention.

In certain instanced damage to the liver may be so severe as to require the replacement of the damaged organ with a new liver via transplantation.

Dangerous drug injury claims require the proving of one of three distinct product liability causes of action. 1. Defect in the design of the product. 2. Defect in the manufacturing process of the drug. 3. Labeling defect – failure to warn consumers of known or knowable risks associated with the use of the medication.

Compensation Available for Victims of Dangerous Drug Side Effects

Victims of acute liver failure are entitled to compensation for injuries suffered due the overdose of Tylenol. The value of a defective drug injury lawsuit is predicated on several interrelated factors. Some of the most important factors in determining the estimated value of a Tylenol acetaminophen liver failure lawsuit are as follows.

Certain relatives of individuals who have died due to acute liver failure resulting from the intake of Tylenol as well as other medications containing acetaminophen are entitled to file a wrongful death caused of action against all at fault liable parties. \

Our law firm is proud to represent victims of defective and dangerous over the counter medications resulting in severe medical complications including the development of liver failure due to the taking of Tylenol and other acetaminophen medications. To reach out to us and speak with an attorney regarding your legal matter call (855) 339-8879. All consultations are free of charge and completely confidential.