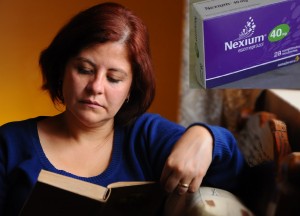 Nexium is a drug developed to treat gastroesophageal reflux disease or GERD as well as conditions which produce too much stomach acid. The drug is prescribed for the purpose of treating heartburn and other gastroesophageal issues. However, studies have shown that exposure to the drug can cause serious injuries. These injuries include diminished bone density, heart disease and other harmful side effects. In most cases patients were unaware of these potential risk factors. Doctors and manufacturers did not warn of the potential harm which Nexium could cause. However, it has recently been released that there are a number of potential issues which can occur from taking Nexium. Users  of Nexium are urged to seek proper medical attention if they are experiencing complications. Consult with an attorney to know your rights. Issues such as bone fracture are serious. These types of injuries are painful and at time permanent. The long-lasting implications of taking the drug are unknown. It is important to speak to a qualified attorney regarding your injuries. More Information on Hip and Wrist Fractures Caused by the Taking on Nexium

Who is Liable – Lawsuits Against Nexuim Drug Manufacturers?

Who is liable in defective drug cases? Is the manufacturer of Nexium liable? Are doctors who prescribe the drug liable? Below is a list of those who can potentially be liable for the injuries resulting from taking the drug.

Testing Laboratory Liability If there was testing done by laboratories who ultimately approved the drug, they can be held liable for the injuries sustained.

Doctor Liability Doctors who ultimately prescribed Nexium will be held liable so long as they were in the chain of distribution. In certain cases doctors who failed to warn of known dangers can also be held liable as they breached their duty to inform clients.

Hospital Liability If the hospital was involved in the commercial chain of distribution will also be held liable to some degree.

Nexium can cause serious injuries. While there are number of different side effects the most alarming to date is bone fracture. These bone fractures which occur from brittle bones can excruciating, often requiring permanent long-term care to treat. Below is an explanation of bone fracture resulting from Nexium.

Bone Fracture In certain cases the use of Nexium has caused bone fracture, particularly in the hip, wrist and spine. Generally, these fractures were present in patients taking proton pump inhibitors. Patients who took such inhibitors were known to have an increased risk of hip fractures. In May of 2010 the FDA revised there warning label to reflect potential dangers associated with taking Nexium. They indicated that patients were likely to suffer bone fractures in the hip, wrist and spine. Additionally, it was found that those who smoked had a higher likelihood (51%) of suffering such injuries. Lawsuits filed against the manufacturer assert that serious bone deterioration occurred as a result of taking Nexium. According to recent lawsuits it was reported that taking the drug interrupted your ability to take in calcium. As a result, bone density was significantly diminished causing sudden bone fracture. In the studies conducted it was reported that woman and smokers faced a substantially greater risk of injury. Bone fractures which occur from taking the drug are dangerous. If you have been injured speak to a medical professional.

It is the legal right of anyone injured from taking a defective drug to seek restitution for their injuries. You must be compensated for the injuries you have sustained as a result of taking a drug which is now deemed defective. Your recovery will be through holding the makers and distributors of Nexium responsible for your injuries. In order to hold these pharmaceutical companies liable, you will likely need to pursue legal claims for your injuries. Most of the time filing a lawsuit will be the only way proper restitution or compensation will be paid for your injuries. This includes compensation for all medical bills both past and present. As well as cost of future care. Loss of income and general diminished quality of life is also compensable. If you have suffered any of the injuries described from taking Nexium consult with a defective drug attorney today. You may be entitled to compensation for your injuries.

What is My Nexium Case Worth?

What is the value of your Nexium case? There are few ways to estimate the value of a case. First you can look to see what other claimants have been awarded or you can assess the damage caused as a result of taking Nexium. Looking at what other parties have received is a good estimate, but never really accurate. The reason being that each case is different. It is unlikely that any two cases are alike. This can be because of your body’s response to Nexium or other possible causes. Another way to evaluate the value of your case is to look at the damage. What injuries have you sustained from taking Nexium? If you have suffered bone fractures, hypomagnesium or other related injuries. Generally, the way a dollar amount is placed on a case is based on injuries, medical expenses, future losses and pain and suffering. Until we can calculate and fully understand the scope of all the above variables, it is impossible to properly put an actual monetary value on the case.

Should I Join a Class Action Lawsuit for Nexium?

Before joining any type of class action lawsuit, you should first understand what its impact may be. Class action lawsuits essentially aggregate or combine all cases against a single defendant (Nexium manufacturer). Most of these lawsuits are subject to court approval and once the class is approved, they will allow a single class representative to be the voice of the entire class. In such cases those who have suffered the most will not be given greater compensation for their injuries. These class action lawsuits do not distinguish between the degree of your injury. They look at the injuries of the entire class.

After a settlement is awarded for a class action lawsuit, you will NOT be able to pursue an independent claim. You are not permitted to file a claim for damages because you feel the amount awarded is insufficient. This is why it is important to remove yourself from a class action lawsuit and consider an independent claim for damages. However, this may not be the case for all plaintiffs, and this is why you should consult with a Nexium attorney before making a decision. More Information: Statute of Limitations for Nexium Drug Injuries Filing a Nexium Claim