Mr. Warfaa was kidnapped from his home in the northern area of Samalia in 1987. The person behind the kidnapping was a war criminal – who was eventually hired as an Uber driver. Yusuf Abdi Ali, who seemed to be just a normal Uber driver in Virginia, was also a Somali colonel that shot and tortured Mr. Warfaa. Ali, a commander in the national army (and a supporter of dictator Mohamed Siad Barre), drove for Uber for approximately 18 months with an exceptional 4.89 rating. Ali was identified in a Canadian documentary in 1992. Within a short length of time, Ali was deported from Canada. According to court documents, he was deported for abuse against human rights. Ali eventually entered the U.S.; however, he was also deported. In 1996, Ali re-entered the U.S. 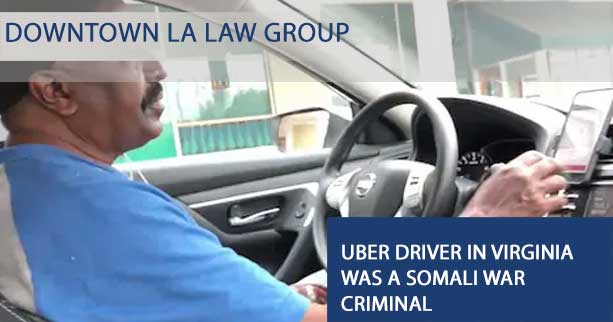 In May, reporters researching Ali went undercover. He informed them that the drivers for both Uber and Lyft full-time, usually on the weekends. When asked about the application process, Ali claimed that it was simple – as simple as passing a background check. How was Ali eligible to drive for any rideshare company with his history? The background check to which Ali was subjected consisted of a review of criminal history based on state/national records, as well as a scan of governmental watch lists based on information from the Interpol and FBI. Neither of these checks came up with any information that might have made Ali ineligible to drive for a rideshare company. Mr. Warfaa filed a civil claim against Ali in 2004. This was long before Ali ever even considered becoming a driver for Uber. Since this information became available, Ali has been removed as a driver for Uber.

What is the Problem?

Without a doubt, there are some civil cases that might be unrelated to a party’s ability to perform a job safely. For instance, a civil case for theft might not affect employment as much as a civil case for assault and battery. Likewise, a civil case for slander might not affect employment as much as a civil lawsuit for sexual assault. Over the years, civil cases have been ignored during background checks. How many criminals could have been identified if civil cases were part of normal background checks? How many victims would have been spared their traumatic experiences had employees with such gruesome backgrounds been identified? Fortunately, there have been no incidents in which Ali victimized any riders during his time as an Uber driver – at least, there have not been any reported incidents. By allowing a war criminal to drive for Uber, the company needlessly put thousands of riders at risk during the 18-month period that Ali was a driver.

Where do war crimes fit here? Anyone with any sort of violent history, including a history of kidnapping and torture, should never be allowed to drive for rideshare companies and have access to riders. Uber failed to subject Ali to an extensive background check. Even a quick online search on his name would have yielded results – considering that he was mentioned in a documentary. By failing to subject Ali to a thorough check prior to allowing him to drive for Uber, Uber recklessly put many riders at risk of suffering harm at his hands. When negligent hiring results in any sort of harm, the employer could be held accountable for the harm suffered by victims. Were you directly affected by negligent hiring? If so, it is important that you seek legal assistance as soon as possible. If you or a member of your family were affected by Uber’s negligent hiring process, either in relation to Ali or any other driver, it is important that you come forward and fight for your right to be compensated.

Filing a Claim and Recovering Compensation

Companies have the duty of ensuring that their employees do not pose a threat to their customers or clients. Uber has a duty to ensure that their drivers do not pose a threat to their riders. If you believe that the harm that you suffered as a rider was caused by Uber’s negligent hiring practices, it is essential that you seek legal assistance as soon as possible. Depending on the specific details of your claim, you might be eligible to receive compensation. Some of the compensation that you might receive could include the following: medical expenses; lost wages; pain and suffering; loss of consortium; funeral and burial costs; punitive damages. If you would like to learn more about the specific type and amount of compensation that you might be eligible to receive, do not hesitate to contact our law firm as soon as possible. Our experts are ready to provide you with the legal assistance that you need to reach a successful claim outcome.

If you believe that you were the victim of negligent hiring practices, do not hesitate to seek legal assistance as soon as possible with the experts at Downtown L.A. Law Group. When you contact our law firm, you will find that we offer both free consultations and free second opinions. During our free consultations and free second opinions, our lawyers will be available to answer all your questions and address all your concerns – ensuring that you have access to all the information that you need to take action against the party that negligently contributed to your injuries. If you were harmed as a result of Uber’s negligent hiring, our experts will help you pursue a claim against Uber and fight for your right to be compensated. If you are ready to benefit from our free legal services, do not hesitate to contact our law firm as soon as possible. Our free legal services are available as part of our Zero-Fee guarantee – which ensures that our clients will never have to worry about paying any upfront legal expenses. Our firm is also strictly based on contingency; therefore, our clients will not be required to pay anything until after they reach successful outcomes. If you would like to learn more about your right to pursue a claim against Uber after being affected by their negligent hiring process, do not hesitate to contact our law firm at your earliest convenience – we are ready to fight for your rights.