On July 23, 2019, at least three people (two men and one woman) were charged for the incident that occurred at Disneyland on July 5, 2019. According to allegations, a family dispute quickly turned violent in the middle of Mickey’s Toontown. The incident was witnessed by park guests, adults and children alike. The incident was caught on video and has since gone viral. The fight goes on for a number of minutes, with Disneyland security nowhere in sight. Eventually, the family was removed from the park. 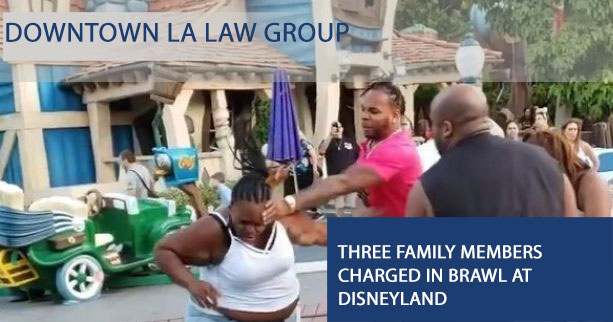 Avery Desmond-Edwinn Robinson, 35, of Las Vegas, Nevada, has been charged with five felonies and nine misdemeanors in association with the Disneyland incident. Robinson attacked his sister, brother-in-law, and girlfriend. He also endangered his child and at least three other children. Other accusations include threatening to kill both his brother-in-law and his sister and trying to run-over a Disneyland cast member after being escorted out by park security. These actions resulted in felony charges of domestic battery, assault with a deadly weapon, assault with force likely to product great bodily injury, and criminal threats (two counts); the misdemeanor charges, specifically, included battery, child abuse, and child endangerment (multiple counts each). If convicted as charged, he could face a maximum sentence of more than seven years in state prison; his bail has been set at $1 million (based on his criminal history). Andrea Nicole Robinson, 40, of Compton, California, faced five misdemeanor charges; the charges included one count of assault and four separate counts of battery. Andrea Nicole Robinson is Avery Desmond-Edwinn Robinson’s sister. If convicted, she could face a maximum sentence of two-and-a-half years in jail. Andrea Nicole Robinson’s husband, Daman Petrie, 44, also of Compton, faced one misdemeanor count of battery. If convicted, he could face a maximum of six months in jail.

Without a doubt, this incident has left the public with a number of questions. The most important questions being the following: where was Disneyland security? Why was the fight allowed to continue for more than four minutes? Why wasn’t the brawl stopped before it escalated? According to reports of the incident, by the time Disneyland security responded to the calls for help, one of the men involved in the fight had already been restrained by a crowd of park guests – this occurred after he was seen beating a woman.

How Did Disneyland Fail? 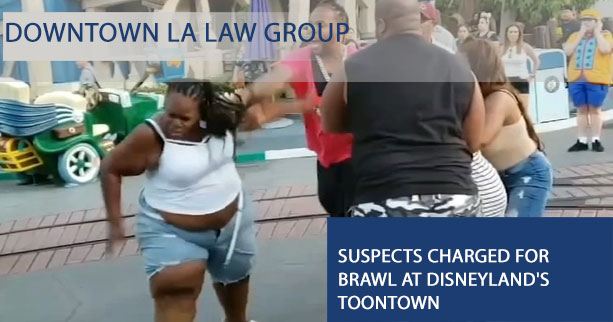 Without a doubt, Disneyland cannot be directly to blame for the fight that broke out within the family. After all, they cannot control family dynamics and how families treat each other. However, Disneyland failed to take immediate action to respond to the incident and address the situation before it escalated the way it did. Disneyland has a duty to keep park guests safe. They must do everything within their reach to ensure that there is no danger to any of their guests. Considering that Disneyland has some of the strictest security when it comes to entering the park (metal detector scanners/searches), it is surprising to learn that Disneyland security allowed so much time to pass before putting a stop to the situation. This raises additional questions. Does Disneyland have enough security to handle situations like the one that occurred earlier this month? Does Disneyland really have what it takes to handle the estimated 44,000 people that visit the park every day? It is possible that Disneyland’s lack of security contributed to the escalation of the fight. In the video and in the incident report, it is obvious that guests were calling for help; however, no body responded. The suspects fought in front of park guests for more than four minutes; security is never on-camera during the time the fight was being filmed. Four minutes is long enough for someone to be seriously injured in a fight. Disneyland failed to protect park guests and address incidents promptly. Countless of innocent guests, which included children, had to witness the horrible incident. If Disneyland had addressed the situation promptly, it would have likely ended before it got as bad as it did. As mentioned above, Disneyland has a duty to keep park guests safe. By failing to immediately respond to the reports of the fight, Disneyland breached their duty of care to their park guests. Because of this, guests were exposed to the grizzly fight, likely suffering harm in the process. Undeniably, it is possible that some guests were physically harmed even though they were not directly involved in the fight. It is also possible that guests suffered emotional and mental distress as a direct result of the brawl that they witnessed. – Amusement Park Sexual Assault Attorney – Water Park Accidents – Theme Park Ride Injury Lawyer – Knotts Berry Farm Accident attorney – Summer Camp Injury Attorney – Vacation Accident Lawyer The incident that occurred on July 5 is one of a kind. What if you were physically injured in an incident that Disneyland security failed to respond to on time? What if you suffered mental and or emotional distress as a result of prolonged exposure to the incident? Depending on the specific details of the situation and the harm that you suffered, you might have grounds to hold Disneyland liable.

The Basics of Liability

This means that the parties affected by any sort of incident caused or worsened by the lack of security or the inefficiency of the security at Disneyland might have grounds to take action against Disneyland.

Could You Recover Monetary Compensation?