On the night of Wednesday, November 7th, 2018, a gunman entered the Borderline Bar & Grill in Thousand Oaks and began opening fire on the patrons and security personnel. The man, identified as Ian Long, was a 28-year-old former U.S. Marine who pulled up to the bar in his car, shot the security officer out front, and proceeded to wreak havoc inside. The gunman has left behind no motive for the shooting, but officers did recover a Glock handgun with a modified extended clip. The shooting occurred on a line-dancing night; most of the patrons were students from nearby universities, as the bar allowed entry to any individuals over the age of 18 years old. Patrons thought that the gunshots were balloons popping and were not immediately aware of the danger. To make it more difficult to discern what has happening, Long was wearing all black and had partially covered his face. It wasn’t until individuals began dropping from the gunshots that the rest of the patrons began fleeing the bar. Long, a 5-year veteran who had served in Afghanistan as a gunner and had instructed other soldiers in Okinawa, Japan, was found dead at the scene shortly after committing the attack. He was found to have killed himself prior to being apprehended, as no other security in the club had the means to subdue him. In addition to several students and security guards, one police officer who was the first to respond to the scene was killed upon entering the bar. Prior to the event, Long had several run-ins with police officers, one of which was a disturbance at his home that was called in by a neighbor. The neighbor described Long as having “banged on the walls” and commenced shouting indiscriminately. When officers showed up, he was irrational and angry, but upon being referred to a mental health specialist, he was released due to posing no apparent threat to himself or society. He had also been involved in an altercation at a bar three years previous. As further information is revealed, family members and loves ones of those injured or killed are encouraged to pursue action against Long’s estate and any other party that could be held accountable for the shooting.

Who is Liable in the Borderline Bar and Grill Shooting?

First and foremost, Ian Long is the primary individual responsible for the shooting in the bar, as he was the one who loaded the gun and carried out the act. Without his actions, there would be no injuries or deaths. However, due to his death, successful litigation and adequate damages may be difficult to win.

Other entities may also be held responsible. The bar did not have ample security to help control the event; all of the guards were unarmed and there was only one posted outside to screen patrons. There was no need for Long to force his way inside as there was no possibility of him being stopped. Inside the bar, there were not enough security guards to protect the hundreds of people who were enjoying their night. Further, reports stated that patrons were breaking glass windows and rushing through alternate exits in an effort to escape, which points to a lack of effective exit routes. During an emergency, patrons should be able to immediately, quickly, and safely leave the bar. Many individuals who tried to leave suffered injuries to their hands and legs and needed to go to the hospital for stitches and treatment. All of the above can be blamed for the wrongful and untimely deaths of the victims.

If a family member or loved one was killed in the Thousand Oaks shooting, you could receive various kinds of wrongful death expenses from the liable parties to offset the costs of the tragedy. Sadly, an occurrence like this can rack up expenses, but you should not be expected to pay them – if someone’s life was taken away, you should be off the hook, and whoever is responsible should bear the brunt of the bills.

Our team of attorneys at the Downtown LA Law Group will work our hardest to ensure that you are given the maximum compensation available for the untimely death of your loved one. We will make sure you receive coverage for the following: If you have questions over what you could potentially earn from a wrongful death lawsuit against the responsible party, call our lawyers today.

Statute of Limitations for a Wrongful Death Claim 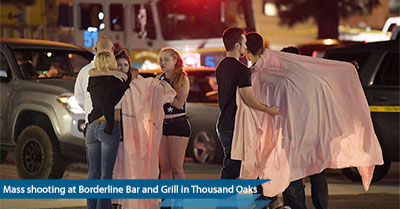 You have two years from the date of the incident to file a wrongful death claim against the liable party. If you do not seek legal action within this time frame, you will be unable to pursue any restitution in the future. It is important that you adhere to these guidelines, as missing them will be disastrous for your claim. If you do not know how much time you have left, or if you believe you are eligible for an extension to the statute of limitations, you can talk to one of our attorneys in Los Angeles.

The Downtown LA Law Group in Los Angeles is here to help the families of victims who were killed in the Borderline Bar and Grill shooting. We are an empathetic team of attorneys whose focus is only to make sure that you are properly compensated for your losses and to help you handle the tragedy as best we can. We have years of experience handling wrongful death lawsuits and know how difficult it can be for families to take action. We want to make the process as painless as possible, and we promise that you will not have to spend time stressing about the case. We will take care of all the legwork for you and ensure that your lawsuit is properly handled. Reach out to our firm today for a free legal consultation with an expert lawyer. All of our consultations are confidential, and none of your case details will be revealed. We are able to be contacted 24 hours a day, 7 days a week, and no question you have for us will go unanswered. Moreover, if you select us, we’ll give you our zero fee guarantee: a promise that you won’t pay for any legal services with your own personal expenses. We’ll cover the costs of the case ourselves, and we will only have our fees covered if we win. If we lose, you walk away debt-free and we eat the costs ourselves. Don’t hesitate to contact the Downtown LA Law Firm if you need more assistance with filing a wrongful death lawsuit after the Borderline Bar and Grill shooting.