Are Service Dogs Allowed in Uber?

Uber has come under fire for numerous reasons, some of which have been deemed illegal and discriminatory. Some Uber drivers have acted with total negligence in the act of driving, but others have been disrespectful and mistreated individuals with certain disabilities or special needs. One such example is related to riders who utilize service animals to help them with activities or emotional support animals that prevent outbursts and attacks. A number of drivers have flat-out rejected riders who have service animals, electing to cancel rides up to the point of pick up. If you have been discriminated against for having a service dog in your possession, you may be able to file a lawsuit against Uber for not allowing your service animal to ride with. Our team of expert California lawyers who have experience with Uber service dog class action lawsuits can help you out. Contact the Downtown LA Law Group today for more assistance on taking legal action.

The Americans with Disabilities Act of 1990 prevents discrimination against individuals who have some form of disability, whether physical or mental. Both State and Federal laws prohibit such discrimination. There are some disabilities that can be controlled by pills, assistive devices, and service animals. Service dogs are not uncommon; they are often bred specifically for the purpose of helping individuals who have limited life functions and capabilities. 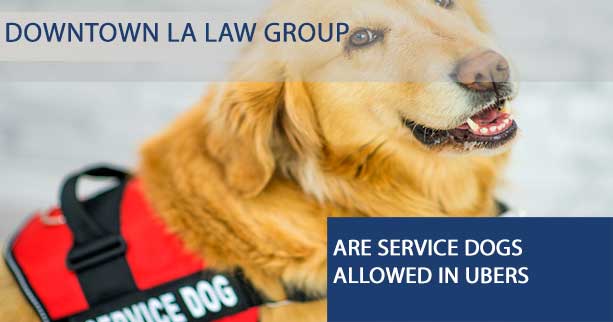 It is illegal to question whether or not an animal is a service animal. This can be complicated because there is no requirement that an animal must wear special tags, differently colored leashes, or any other proof. The driver can only ask two questions of the rider: Is the animal required because of a disability and What kind of work has the animal been trained to perform? According to Uber’s terms and Technology Service Agreement that all drivers must agree to prior to taking trips, drivers must accept these rides without exception. Refusal to do so will lead to removal from the Uber app. Riders will be given certain pieces of information afterward, such as the fate of the driver and what Uber has decided to do. Riders will be automatically given account credit in the event that they are discriminated against because of a service animal. Therefore, you can sue Uber if your Uber driver did not let you on because you had a service dog Common questions surrounding this legal issue include: 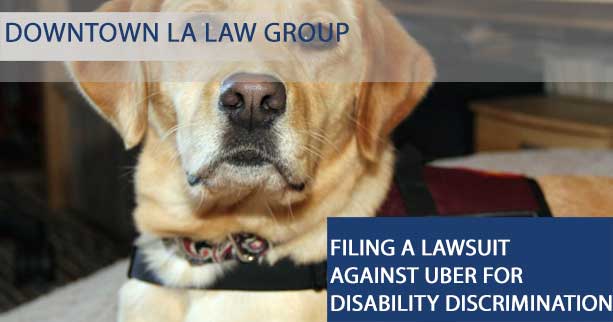 Yes, you can sue Uber if your Uber driver did not let you in the car because you had a service dog. Uber does have a policy for what drivers should do, including opening the door for the animal to come in, potentially providing towels for the animals to sit on, and abstaining from petting the animal.

Filing a Lawsuit against Uber for Disability Discrimination

If you wish to sue Uber if your Uber driver did not allow your service dog to accompany you and thus canceled your ride, you should take steps to get as much evidence as possible. It is important that you take a screenshot of the ride information, which will contain the driver’s license plate number, the driver’s name, his car type (make and model), and your trip details. You should also have a receipt from Uber and from your credit card company if you were charged. Your fee may have been refunded, but you should still provide the proof regardless. You can ask anyone who was with you or who was in the vehicle to provide you with their contact information so you can have eyewitness statements and testimonies. The more support you have in your claim, the higher the chance of success. It is important to file a complaint with Uber about the driver so there is a trail. Too often, individuals will refrain from filing complaints, which makes it difficult for their claims to be proven true. If you immediately complain to Uber about the driver’s conduct, there will be a ticket on the company’s end that you can refer to. You should be aware that there was and Uber service animal class action lawsuit filed by the National Federation of the Blind, the results of which yielded the service animal policy we see today in Uber vehicles. There is an opportunity for you to join a class action lawsuit, which is a collection of plaintiffs with the same or similar complaints and grievances against an entity. When all the plaintiffs pool their proofs and evidence of the discrimination, it will become very difficult for Uber to prove that there was no discrimination at play.

If you wish to join an Uber service dog class action lawsuit, contact our lawyers today for more assistance. We have been involved with numerous types of Uber cases since the company began to take stride.

Individuals who have suffered discrimination from Uber drivers can take legal action against the company. Although the drivers are acting of their own wills, the company can still be held responsible for their actions. Uber’s drivers are technically employees despite primarily working as independent contractors. The company can be made to pay the victim in the aftermath of the incident. For one, riders are usually fully reimbursed for the costs of the trip, but Uber may claim that the refund was agreed and accepted, so it is all that would be given or offered after an incident. It is important that you do not accept too much from Uber; even automatically-generated refunds can be dangerous to receive. Riders can be given compensation for their pain and suffering that arose after the incident. Pain and suffering includes mental traumas, fear, anxiety, PTSD, and more. It can be hard for certain individuals to deal with such mistreatment, especially if there are mental disorders present. Some miscellaneous damages may be awarded, which can cover the losses you suffered if you missed an important function, days of work, job opportunities, and more. Punitive damages can be awarded, especially if Uber tried to cover up for drivers or did not take complaints seriously.

The trouble with class action claims, though, lies in the compensation. On the one hand, it is beneficial for your case if you have numerous other plaintiffs providing their evidence; it means that the case will have an overwhelming amount of evidence against the defendant. However, once the jury has rendered its verdict, there may be a certain amount of compensation awarded. This compensation will be spread amongst the individuals who sued, which can only be a small percentage of what was won. If you feel that an Uber class action lawsuit for service animal is the best choice for you, contact our law firm for more assistance.

Statute of Limitations for an Uber Discrimination Lawsuit

The Best Firm in Town

The Downtown LA Law Group can provide you with the best attorney to sue Uber for not allowing a service animal in an Uber ride. We have years of experience handling claims against Uber, including wage claims, accident lawsuits, discrimination claims, sexual assault claims, and more. We know that disability discrimination and service animal discrimination is a large issue, especially due to the landmark case filed by the National Federation of the Blind. Our lawyers are educated and knowledgeable about Uber and its practices, and we will not give up on your claim until we are satisfied with the result. Our lawyers are aggressive and will relentlessly pursue your rights from start to finish. Call us today for a free legal consultation on your case. We will walk you through the legal process and help you understand any uncertainties you have. We’ll answer your questions and make sure you are fully aware of what the lawsuit entails. If you wish to sue and want our help, we will give you our zero fee guarantee, which states that you won’t have to spend a dime out of pocket for our services. We will only get paid if we win, and if we lose, we get nothing. To file an Uber service pet class action lawsuit attorney, get in touch with our experienced lawyers at the Downtown LA Law Group.