What is the first thing that comes to mind when you think about Tesla? Some people might think about Elon Musk; others might think of expensive electric vehicles. For some, however, Tesla brings a fiery image to mind. Over the years, there have been many incidents in which Tesla vehicles caught on fire – resulting in injuries and fatalities. Even with Tesla’s advanced technology, certain failures within the company are putting their consumers in danger. Do you own a Tesla? Does a member of your family own a Tesla? Did the Tesla erupt into flames injuring you or killing a member of your family? If so, you might be interested in learning more about the possibility of pursuing a claim. Without a doubt, you could take legal action if the negligence of Tesla contributed to the fiery vehicle and the harm that you or your family suffered. If you would like to discuss the possibility of pursuing a claim against Tesla – or even the right to pursue a claim – it is important that you seek legal assistance as soon as possible with the experts at Downtown L.A. Law Group.

Downtown L.A. Law Group is a personal injury law firm with many years of experience handling a variety of claims. At our firm, we are not intimidated by prestigious companies. We believe that all companies should be held accountable for the harm that they cause. When you contact our law firm and allow our experts to handle your claim, you can be certain that there will always be someone aggressively fighting for your rights. If you would like to discuss your claim with the experts at our law firm, do not hesitate to contact us immediately.

Within the last few years, there have been a number of incidents involving Tesla vehicles. Some of the most notable incidents include the following:

According to Business Insider, there have been at least 20 reported incidents of Tesla vehicles igniting since 2013; in a 14-month period, there have been at least 5 deaths. Without a doubt, this information has resulted in a lot of negative attention towards the innovative company. With the negative attention, many claims have been made against Tesla – specifically claims regarding the safety of the vehicles. How has Tesla responded? Specifically in the instances in which the drivers/occupants of the vehicle died, the company claims that fires had nothing to do with their death. In other words, Tesla claims that the deaths associated with their vehicles are associated with the impact – even when the cars burst into flames after the collision. The company claims that the number of fatalities over the year would be the same even if none of the accidents resulted in fires. Tesla also stands by the claim that their vehicles have the lowest risk of injury based on the U.S. safety rating program (in comparison to all other vehicles that have ever been tested). The company also claims that their vehicles are ten times less likely to ignite (when compared to gas vehicles).

NTSB Investigating a Tesla That Crashed Into Fire Truck Engine 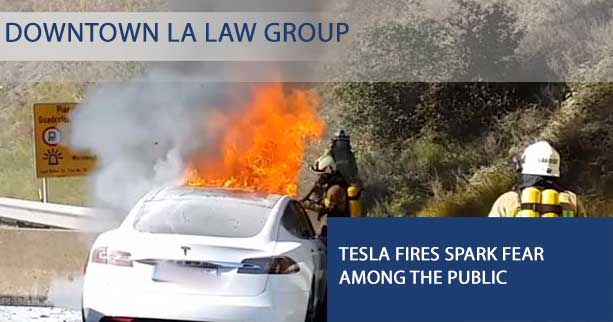 To understand why many parties consider Tesla vehicles to be dangerous – specifically, fiery death traps – it is important to understand how the fires start. First, and most importantly, it is necessary to understand that these vehicles have lithium batteries. The most common and straightforward reason for lithium batteries to result in fires is battery trauma. In crashes, the lithium battery could sustain damage – the trauma to the battery can immediately result in flames. Tesla batteries are comprised of thousands of cells. When a battery is damaged, the battery can go into thermal runaway (when temperature in a battery cell quickly increases triggering an increase in temperature in other cells); in general, thermal runaway is described as a temperature change that changes other conditions resulting in further increases in temperature. Cellular propagation occurs when the battery cells are triggering further changes (in this case temperature changes). In many cases, cellular propagation can stop itself inside the lithium battery – think of how removing just one domino can end a falling row of dominoes. When it doesn’t stop itself, however, the battery can become engulfed in flames – a fiery outcome is considered spontaneous combustion. According to experts, just one defective battery cell can trigger thermal runaway. Although defective battery cells can result from battery trauma after a collision, it is also possible for batteries to become defective during manufacturing. There has been at least two incidents in which Tesla’s batteries have been compromised. Most recently, the following two incidents have affected batteries:

Although firefighters have the knowledge necessary to put out car fires, past incidents have revealed that Tesla fires are not the same as any other car fires. Tesla autos have lithium-ion batteries. The fires originate from these batteries; however, they cannot be fought like the average car fire. Foam and dry chemicals usually used to fight car fires are inefficient for these fires. Instead, these fires must be fought with anything from 500 to 8,000 gallons of water, time, and patience. Even after the fire is out, it can reignite hours later – this is common of battery fires. In one incident in particular (mentioned above), the auto ignited at approximately 2 p.m. while at a repair shop. This specific fire required 2,000 gallons of water before it was finally out. However, approximately eight hours later at about 10 p.m., the vehicle reignited in the repair shop. Because the battery was so damaged after the fires, the authorities were unable to determine a clear cause of the two fires. It seems to be common for vehicles with battery fires to reignite relatively soon after the first fire. In fact, experts on electric vehicles recommend that any vehicles that have had a battery fire are kept at least 50 feet from any buildings or object for at least a few days – until the danger of a subsequent fire decreases.

Is Tesla Liable for the Harm Suffered due to Fires?

Although the reasons that Tesla vehicles end up in violent fires in unclear, there is a significant possibility that a defect in Tesla batteries increase the chance of autos erupting in flames. Because of this, it is possible that Tesla be liable for all harm suffered as a result of the fires in their vehicles. Why could Tesla be liable? All companies owe their consumers a specific duty of care. In other words, they must do everything within their reach to ensure that their products are completely safe for use prior to making them available for the public. Companies must inspect their products, subject them to rigorous tests, and do everything within their reach to ensure that their products are as safe as possible. When companies fail to exercise their duty of care towards their consumers, they are breaching their duty of care; this can cause incidents which can result in significant harm. If victims and their families could prove that Tesla breached their duty of care and negligently contributed to the harm caused by the fire in their vehicles, the company will likely be liable and claims could reach successful outcomes. If you would like to learn more about Tesla potentially being liable for the harm that you and your family suffered, do not hesitate to seek legal assistance with our experts as soon as possible.

The Possibility of Pursuing a Claim

Do you have the right to file a claim? Given that the fire that engulfed the Tesla was caused by the company’s negligence, victims and their families will likely have grounds to take legal action against the company. What type of claim could you file? The answer to this question depends on the specific details of your claim. For instance, if the car was engulfed in flames and a party was harmed due to a defect, claimants could pursue product liability claims. On the contrary, if the fire resulted in the death of a party, surviving family members will likely be eligible to file a wrongful death claim. In addition to these two options, there is also a possibility of participating in a class action lawsuit depending on the circumstances. If you would like to learn more about your right to pursue a claim or about the specific type of claim that you could pursue, do not hesitate to seek legal assistance with the experts at our law firm as soon as possible.

The Right to Receive Compensation

If you or a member of your family suffered harm due to the negligence of Tesla, you will likely have grounds to sue. Depending on the details of the claim, you might even be eligible to recover compensation.

The categories of compensation that you might be eligible to receive are as follows:

Without a doubt, Tesla is taking the car industry by storm – their vehicles are redefining the industry. Tesla is constantly in the spotlight. Recently, however, Tesla has been in the spotlight for the wrong reasons. Specifically, Tesla has been repeatedly associated with fires. There have been many instances of Tesla fires in which there have been multiple fatal victims. Without a doubt, these seemingly random fires pose a significant threat to anyone who might drive or ride in a Tesla. If you suffered injuries or a member of your family died as a direct result of a Tesla auto fire, you might be interested in exploring the possibility of filing a claim against Tesla.

If you would like to learn more about potentially filing a claim against Tesla for the harm that you or your family suffered, do not hesitate to contact the experts at Downtown L.A. Law Group at your earliest convenience. At Downtown L.A. Law Group, we are dedicated to representing all victims who have been harmed due to the negligence and recklessness of other parties. Our lawyers have many years of experience handling a variety of claims and helping victims and their families to recover the monetary compensation that they rightfully deserve.

When you contact our law firm, you can be certain that our experts will do everything within their reach to ensure that you have access to all the information that you deserve. You can contact our law firm without ever having to worry about legal expenses specifically due to our free legal services. Our firm offers both free consultations and free second opinions as part of our Zero-Fee guarantee – which ensures that our clients never have to worry about paying any upfront legal fees for any of our legal services. Because our firm is also based on a contingency structure, our clients will never be expected to pay any legal expenses until after reaching successful claim outcomes – if you do not win, you will not be required to pay anything.