Two 13-year-old high school students have been charged after a brutal attack on campus of a Moreno Valley school. The teenagers were specifically charged with assault by means of force likely to produce great bodily injury. A spokesperson for the Riverside County District Attorney’s Office stated that charges could be added or changed altogether based on any new information or evidence available. 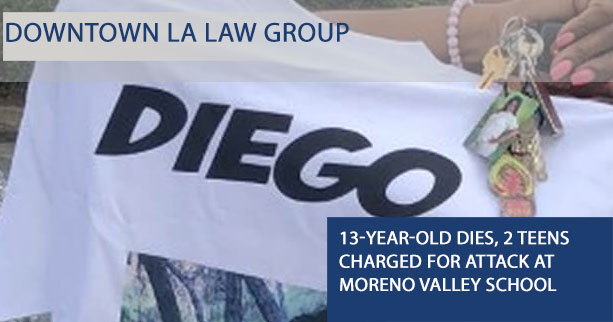 The incident occurred on September 16, 2019 on campus of Landmark Middle School. The 13-year-old victim, identified as Diego, was sucker-punched; he sustained critical injuries. Diego was hospitalized for more than a week. On September 25, 2019, Diego was determined to be clinically dead. The attack was caught on video. According to the Los Angeles Times, “The video of the attack shows a boy sucker punching another boy, who is then struck by a third person standing out of frame. The child appears to hit his head on a concrete pillar as he falls to the ground. The assailant who threw the first punch strikes the boy again and then runs away.” The incident is very similar to another that occurred more than twenty years ago in the same school. In October 1998, a mother was called to pick up her son from the middle school. A student had punched her 12-year-old son in the head. The 12-year-old student also died of his injuries. According to reports surrounding the incident, Diego had been repeatedly bullied in the past. Approximately one week before the brutal incident that eventually resulted in his death, Diego and his mother complained to the school about the bullying – but nothing was done.

No parent wants their child to suffer bullying. At schools, parents expect their children to be in a safe environment. However, school can be a nightmare for many students – especially those who are targeted by their peers. Many parents come directly the schools for answers to their questions. Why are their kids being bullied? What is being done to address the bullying and bring it to an end? Why is the bullying continuing? Many parents believe that schools and the entire districts are simply not doing enough to prevent these brutal attacks. Some even claim that the lack of action is contributing to these incidents. Are schools behind all of this? Have schools really failed to keep students safe?

Could a school or a school district be liable for the harm that students suffered by students in bullying incidents? Teacher aids, teachers, and all school staff including office workers, counselors, deans, and security personnel have a duty to keep the students safe above all else. If you have ever witnessed a school fight, you might remember staff members rushing to split up the fight. In the Moreno Valley incident that resulted in Diego’s death, there was no immediate response. The student was struck once; he was then struck another time by another student, which resulted in Diego hitting his head on a concrete pillar as he falls. Diego is hit another time by the first student to become physically violent. Would Diego still be alive if the incident would have come to an end before it ever became physical? Without a doubt, if Diego had never been attacked, he would not have suffered the injuries that would have eventually killed him. 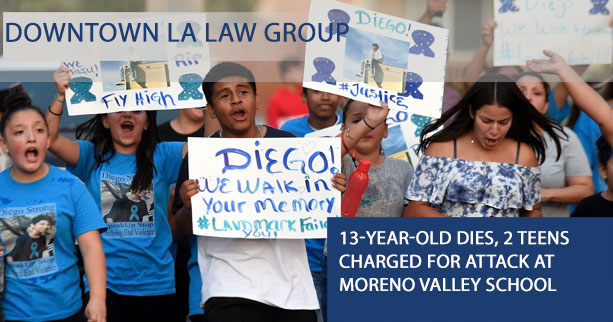 If evidence can prove that the school and the district negligently contributed to the incident (either through a lack of action, a lack of supervision, or a lack of security, for example), Diego’s parents could pursue a claim against the school. Was your child harmed in an incident like the incident involving Diego and the Moreno Valley middle school? Whether your child suffered injuries or lost his or her life, you might have grounds to pursue a claim. If you are unsure about your right to sue for the harm that your child suffered on school-grounds, do not hesitate to seek legal assistance as soon as possible.

Parents all over Southern California are worried for their children after Diego’s death in direct association with a school-related attack. If you and your child ever find yourselves in a horrifying situation like the one Diego and his family experienced, it is essential that you seek legal assistance as soon as possible. If you are in need of legal assistance, do not hesitate to contact the experts at Downtown L.A. Law Group. Downtown L.A. Law Group is a personal injury law firm with many years of experience representing victims and their families. Our law firm is dedicated to ensuring that all affected parties have access to the legal representation that they need. That is why we offer free legal services – which include free consultations and free second opinions. During our free consultations and free second opinions, our lawyers will be available to answer all your questions and address all your concerns. To benefit from our free legal services, do not hesitate to seek legal assistance with the experts at our firm at your earliest convenience. Our firm offers a Zero-Fee guarantee to ensure that you never have to worry about paying any upfront legal fees for any of our legal services. Because our firm is also based on contingency, our clients will never be required to pay anything until after reaching a successful claim outcome. If you are ready to discuss your claim with the experts at our law firm, do not hesitate to contact Downtown L.A. Law Group as soon as possible – we are ready to represent you.