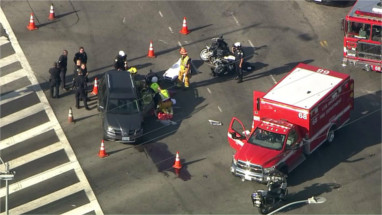 Our law firm is investigating an accident that occurred on August 8, 2017 in Los Angeles. An LAPD officer who was riding his motorcycle was injured in Mid-City on Tuesday morning on Venice Blvd. and South La Brea Ave. The officer and the driver of a black SUV were involved in the accident, but authorities have not stated what the cause of the crash was, nor who was at fault. The incident occurred around 8 in the morning and caused delays for some time. The SUV was parked near the motorcycle and the officer in the wake of the crash. Medical personnel could be seen treating the officer at the scene before taking him to a nearby hospital for further treatment. Authorities have released no additional statements on the condition of the driver of the SUV, the specifics of the crash, and the names of the two men involved.

Reasons to File a Claim

If you have been injured in an automobile crash due to the neglectful actions of a law enforcement officer, Downtown LA Law Group can help you move forward with a personal injury lawsuit against the agency. Police officers from multiple vicinities have been guilty of ignoring basic traffic laws due to their status as cops. Officers from Los Angeles, San Diego, and Long Beach have been involved in numerous accidents over the past few years. Additionally, California Highway Patrol has added numbers to the amount of freeway crashes across the state. Police officers sometimes speed past traffic via the shoulder or opposing lanes, run red lights and stop signs without sirens or lights, and drive recklessly in crowded or bottlenecked areas. This type of driving places other drivers, pedestrians, and cyclists at risk. As another driver on the road, you are expected to pay reasonable care to other drivers; in the event that you are not afforded reasonable care and that duty is breached, resulting in an accident or incident and further personal harm or injury, you have ample grounds to file a personal injury lawsuit based on negligence. This lawsuit, if won, can result in you being covered for: Medical expenses, including hospitalization, surgical costs, medication and other painkillers, and physical rehabilitation. Lost wages resulting from time off from work. You may not have a vehicle to make it to your job or you are in the hospital or undergoing treatment; additionally, you may have to commit to other situations, like court cases and hearings, or spend time searching for a new car. Property damage, which covers damages to your car and any belongings you had inside the vehicle that were also harmed in the crash. Pain and suffering in the aftermath of the accident. Common examples of pain and suffering include mental disorders, anxiety, fear, PTSD, and other conditions that appeared after the accident and injuries occurred.

We at Downtown LA Law Group are willing to take on your case and fight for your rights as a citizen and driver. We do not miss deadlines or statues of limitations and our team of personal injury attorneys are some of the most experienced law experts in the Los Angeles area. Our firm believes that all drivers should be held responsible for their negligent actions, irrespective of whether the driver is a regular person, ambulance driver, tourist, or truck driver. Police officers are no exception to this belief; further, the agencies they represent should be liable for the reckless actions of their employees. In the event of an accident with the police, we will make sure that your case will be treated with careful attention. Our goal is to get you the compensation you deserve to cover all your expenses, but we also want law enforcement agencies to protect citizens by cutting down on risky driving. Preventing further injuries and accidents is equally as important as helping those who have been hurt. Call us today, and one of our personal injury lawyers will discuss your case with you in a free legal consultation. We will give you all the information you need on what you can expect out of a personal injury lawsuit, the damages you may receive, and the entire legal process. We do the work so you don’t have to spend time and energy away from what matters. Importantly, we don’t seek payment for our services until we win your case. Our zero fee guarantee is in place to assure you that we strive to recover necessary restitution in your name. If we cannot bring you the compensation we promise, we do not receive any money. You don’t owe a dime unless we win your case for you. To learn more about filing a lawsuit against law enforcement officers in the event of a car accident, call Downtown LA Law Group any time.