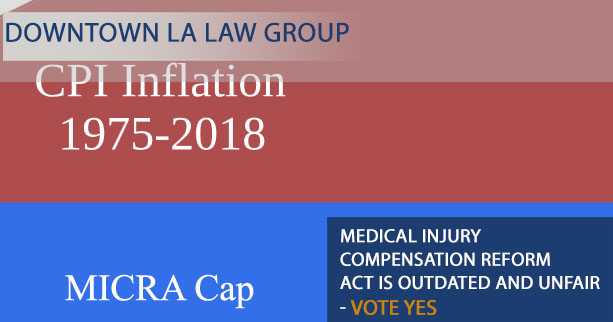 The medical malpractice that has affected children, parents, and the elderly alike resulting in permanent injuries and even death in some cases continues to be undervalued due the outdated and unfair Medical Injury Compensation Reform Act. Victims of medical malpractice who have lost limbs and suffered paralyzing injuries are unjustly only recovering an insignificant portion of the non-economic compensation to which they are entitled – which is reduced even further due to expensive legal fees. This also applies to the surviving family members of victims who lost their lives due to medical negligence. Do you think you deserve more than $250,000 if you or a member of your family was subjected to medical malpractice? The loss of life and the loss of ability to live a normal life is worth significantly more than $250,000 – but California’s current legislation does not allow the parties affected by medical malpractice to be rightfully compensated. This cap on non-economic damages is unconstitutional because it does not allow jurors to award victims the amount that they think they deserve. Jurors dedicate significant time and effort during trials. They spend countless hours listening to claims, evaluating evidence, and deliberating their decision to ensure that victims are rightfully compensated. However, jurors are often unaware that all their hard work goes down the drain when the cap is applied and the non-economic compensation portion of the award is reduced to $250,000 regardless of the specific circumstances of the claim. The Medical Injury Compensation Reform Act is a violation of Civil Rights as well as Constitutional Rights to a jury trial that determines the compensation that claimants are eligible to receive. The Medical Injury Compensation Reform Act lies to Californian jurors. The Medical Injury Compensation Reform Act prevents claims from being efficiently valued on a case-to-case basis. Other states do not have such caps on the non-economic damages available – and they are allowing jurors to rightfully compensate the victims affected by medical malpractice. At Downtown L.A. Law Group, we support victims. We support injured victims and surviving family members. We have a thorough understanding of all the difficulties that are likely to arise due to being affected with medical malpractice. We do not believe it is fair for victims of medical negligence to be capped at $250,000 for non-economic damages. It is not fair for victims of medical malpractice to be subjected to these unconstitutional damage caps. At Downtown L.A. Law Group, we support all parties who have been permanently affected by medical malpractice. Vote YES on the ballot measure to finally put an end to this injustice.