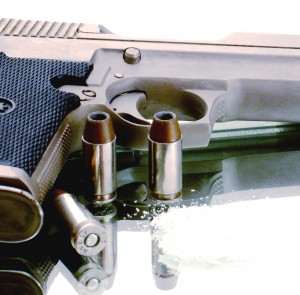 Gun or firearm malfunctions cause by defective design and manufacturing can cause serious injuries including death. Manufacturers of such inherently dangerous products can be held strictly liable when they fail to meet certain safety requirements or fail to implement features that would have avoided injury. When someone is injured or killed as a result of defective weapon or gun, their heirs can bring a wrongful death lawsuit on behalf of the deceased party. If serious injury resulted the injury party can bring a cause of action to recover for his injuries including both economic and non-economic harm. List of Defective Firearms resulting in personal injury

If you have been injures by any of the above guns or bun gun modification devices contact our firearm defect lawyers today.

What can make my gun defective? A defective weapon can be dangerous in the hands of even the most experienced or skilled shooter. Guns are inherently dangerous, they carry with them both an assumption that they can cause injury and a potential to bring about life threatening injury. However, if the injury is caused by the weapons or guns performance in a manner not intended, then a cause of action for product liability can be found. What is a product liability claim? A claim for a defective product, essentially asserts that the product failed to perform in the manner for which it was intended. This can be shown either by a clear defect in design, a manufacturer’s defect or inadequate labeling. Gun’s can be considered defective when they have a faulty trigger, a defective magazine or other factors which will discharge the weapon unintentionally. If it can be shown that the weapon was defective for any of the aforementioned issues then a cause of action for injuries can be found. Below are list of common gun safety features which are feasible and can prevent injuries.

Chamber Indicators Chamber indicators allow for the user to determine whether the the weapon is loaded or not. In cases where the injury was caused because the user was not aware that the weapon was loaded then a possible cause of action can occur. Courts will consider the feasibility of adding the device, the cost and whether it would actually have made the weapon safer.

Does it matter where I purchased the weapon from? Generally, the manufacturer will be liable when the weapon is defective. Whether you purchased it from a commercial seller or a 3rd party will interfere with whether you can join the seller as a defendant. If the seller is not a merchant, commercial seller or one who routinely engages in the sale or transaction of this kind, then they cannot be liable. However, liability can be extended when there was knowledge and the seller failed to disclose the defect. It is important to speak with a qualified attorney with product defects to determine who the weapon was purchased from in order to determine liability.  Our defective gun attorney will investigate  and include all the necessary parties in any potential lawsuit.

What if I modified the weapon?  Gun Modification leading to gunshot injuries Modifications are common; however this can waive certain merchant liability issues. When the weapon is modified from its original manufacturer setting, then they may not be held liable for the defect of the weapon. However, certain type of trigger modifications, magazine modification, sight modifications or other firearm modifications can hold the seller liable. Our offices will have the weapon inspected by an expert to determine whether the modifications were the result of the injury, or whether it was defective without such modifications. Can I sue a gun manufacturer even though I modified my weapon? This is a common question and is complex to determine. It will hinge on certain factors. If you have been injured contact a firearm defect attorney at Downtown LA Law.

Gun Defect Injuries: Our California Defective Gun Attorney is here to help A defective gun or defective firearm can cause devastating injuries, even death. When the gun fails to perform in the manner it was intended all those within its firing perimeter can be seriously injured. Hunters, marksman, patrons at firing ranges and innocent victims can all be hurt. When the weapon misfires, improperly recoils, explodes or causes injury then the manufacturer and re-seller can be held accountable.

If you have been hurt or your loved one has been injured, contact Downtown LA Law for a free consultation. Our fees are based entirely on recovery and you are not charged anything unless we recover for you. Contact us today at 855-385-2529 for a free consultation of your claim and if you already have representation give us a call for a second opinion. We can evaluate your file and let you know whether your case is being handled appropriately.