Waymo (Google Self-Driving Car Project) is a self-driving technology company dedicated to making transportation safer and easier for people around the world. Waymo represents a new way forward in mobility – it is based on technology developed since 2009 in Google’s labs. As mentioned, Waymo’s goal is to make transportation easier but most importantly safer. This goal is based on the unfortunate fact that traffic accidents result in more than 35,000 deaths per year – only in the U.S. Approximately 94% of these fatal accidents in our country are caused by human error or human choice. Because of this, Waymo is committed to developing fully self-driving vehicles. Not only can self-driving vehicles dramatically reduce the number of fatal deaths due to human error/choice, but also can allow the elderly, blind, or disabled (people who cannot and should not drive) to have a reliable method of transportation. As Waymo’s technology continues to advance, the company is also exploring the possibility of integrating their self-driving tech into commercial vehicles. The Waymo fleet of self-driving vehicles includes a number of recognized makes and models. The fleet consists of modified vehicles, which have included Toyota Priuses, Lexus SUVs, Chrysler Pacifica Hybrid minivans, and the custom-built prototype nicknamed “Firefly.” Waymo has also recently partnered with Jaguar to introduce premium electric self-driving vehicles into the Waymo fleet. 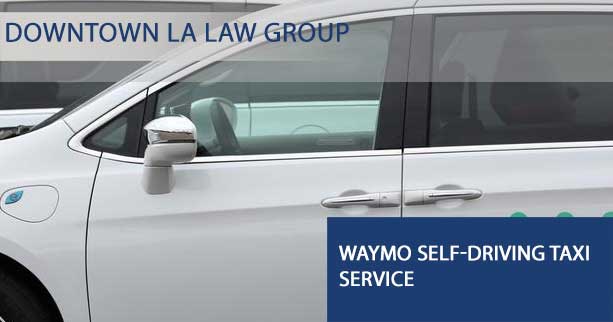 Because the Waymo self-driving technology is so new, all cars come with a trained back-up driver. These trained drivers are there to ensure that all Waymo passengers have a convenient and comfortable experience traveling in the self-driving vehicles.

Waymo is currently focusing on specific amenities to entice rider to use its self-driving taxi service with a goal of potentially increasing profitability. Some of the different amenities that have recently been implemented in the self-driving vehicles include the following:

For some, the different amenities Waymo offers in their vehicles might be enough to be more willing to travel in self-driving vehicles. However, it is important to consider the facts. Since February 2018, Waymo self-driving vehicles have traveled 5 million miles – all with the presence of a trained back-up (human) driver. The purpose of the back-up driver is to both monitor and override the autonomous (self-driving) mode to improve safety while in motion. Why is this relevant? According to reports, the intervention of these Waymo back-up drivers was necessary every 5,600 miles (on average). Considering that most rides are short-distance, you might not be worried about something that might happen every few thousands of miles. The fact that the autonomous vehicles in the leading rideshare company required back-up driver intervention approximately every 13 miles (in comparison with Waymo’s need for intervention every 5,600 miles) might give you some peace of mind. Regardless, the self-driving vehicles needed human intervention – because the technology is still not 100% reliable. There have been many instances in which vehicles with advanced technologies have resulted in fatalities. Consider the following information.

None of the incidents involving fatalities mentioned above included Waymo vehicles, but that does not means that their self-driving vehicles have never been involved in crashes. In June 2015, Google revealed that their self-driving vehicles had been involved in 12 collisions. According to the report, 8 of the collisions were rear-end crashes, in which another driver at stop signs or traffic lights rear-ended the autonomous vehicle. The other collisions include two side-swipe crashes, one stop-sign rolling collision, and one collision when a back-up driver was manually driving the vehicle. Just a month later, in July 2015, there were two additional crashes. Regardless, Google always maintained that their autonomous vehicles were never at fault because in all the collisions the vehicle was either being controlled manually or was struck by a negligent driver. There is one exception, however. In February 2016, while slowly moving forward towards a stoplight, a self-driving car attempted to avoid hitting sandbags that were blocking its path. While trying to maneuver around the sandbags, the vehicle struck the side of a bus. Google accepted responsibility for this incident and claimed that it was a learning experience.

As explained above, self-driving vehicles can be involved in auto accidents. The possibility of both fatal and minor accidents is real. Because of that, it makes sense that Waymo is insured. Waymo partnered with Trov. Trov, founded in 2012 and headquartered in the San Francisco Bay Area, is the world’s leading insurance platform – specifically, the leading on-demand insurance platform. Unfortunately, there is not much information available regarding the coverage that Trov provides for Waymo and their riders. However, it is safe to assume that all riders and other parties that might be harmed in any accidents involving Waymo might be covered by this insurance coverage.

What if I was in a Waymo Accident?

Could You Receive Compensation?

Downtown L.A. Law Group is a personal injury law firm with many years of experience handling a variety of claims. We are dedicated to representing the victims affected by all sort of personal injury accidents. Throughout our years of experience, we have successfully handled countless cases, ensuring that our clients – the unfortunate victims of personal injury accidents – recover the compensation to which they are entitled. If you would like to learn more about your right to pursue a claim after being involved in a Waymo accident, do not hesitate to seek legal assistance with our experts at your earliest convenience. Our lawyers offer free legal services to ensure that all parties affected by personal injury accidents have access to our expertise. During our free consultations and free second opinions, our lawyers will be available to answer all your questions, address all your concerns, and ensure that you have the information and tools that you need to pursue your claim. If you would like to schedule a free consultation or free second opinion, do not hesitate to contact us. You can contact us without ever having to worry about paying expensive fees – as our firm offers a Zero-Fee guarantee. Our Zero-Fee guarantee ensures that our clients will never be required to pay anything until after their claims reach positive outcomes. If they do not win, they will not be required to pay anything. If you are ready to discuss your current situation and the possibility of pursuing a Waymo accident claim with the experts at our firm, do not hesitate to contact Downtown L.A. Law Group today.