With the prevalence of cars on the road, it is necessary that there are ample safety features in every vehicle. Drivers should not be in danger for simply being behind the wheel: they should be protected in the event of accidents and should not run the risk of suffering injuries because of a faulty design with the vehicle. The automobile manufacturers should make sure that all of their cars can protect the people inside of them without malfunctioning or breaking in some way. In the event that you are involved in a car accident and you get hurt due to a malfunction with your seat belt, you can take legal action against the car company. If there were multiple individuals affected and the cars exhibited similar defects, you could join a class action lawsuit. Our team of seat belt class action lawsuit attorneys at the Downtown LA Law Group will gladly handle your claim for you and work to secure you the maximum compensation available.

Seat belts protect you from being ejected from the car, thrown through the window, or dislodged from your seat. As long as you stay relatively stationary, the airbags can safely deploy and prevent you from banging into anything during the impact. For the most part, seat belts are extremely safe and are a critical and crucial aspect of injury prevention in automobile accidents. However, there are many ways for seat belts to malfunction. The issues can cause individuals to suffer great injuries, even permanent damage, as they would not be protected at all in the event of a crash. In other cases, the seat belts can actually cause injuries, which may be attributed more to errors with the design of the belt than a normal malfunction or defect. A few of the types of malfunctions include:

– What is the value of my seat belt defect lawsuit?

These seat belt defects should not be ignored if you find them prior to an accident, and if they are the primary cause of your injuries in a crash, you should sue the automobile company responsible for creating the car with such troubles. Our team of seat belt failure attorneys can help. You may not be alone in your incident. If one car has such defects, it is likely that more models will as well. You can join a class action lawsuit if other people are hurt because of the defective seat belts. 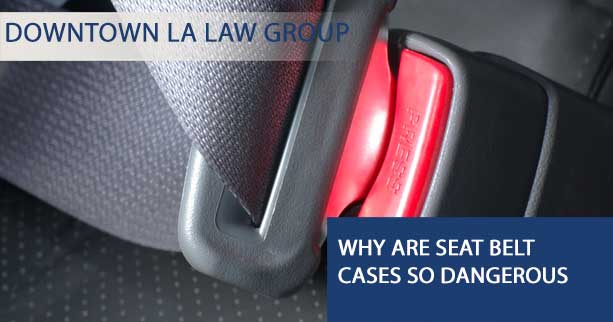 If your seat belt malfunctions, you could suffer a number of severe damages that may otherwise not have happened. You could have been launched into the steering wheel or through the windshield, or the seat belt could have cut into you. Some of the injuries that you could suffer due to a broken seat belt include:

Many times, extensive injuries can be prevented by simply wearing a seat belt. If you were wearing a seat belt and it broke, you should not be expected to cover your expenses since you were doing all you could to be safe. The company should be held accountable. In some cases, there must be reports of injuries before a company even begins to recall and inspect cars and seat belts. This delayed reaction can inadvertently cause even more injuries. If it is revealed that a seat belt defect was present in many cars and numerous different parties were injured because of the issue, you could take legal action against the company collectively in a class action claim.

In most cases, you can simply gather your evidence and submit it to the insurance company with a demand letter to pursue compensation for your damages. If you wish to file a class action claim, your evidence will be assembled and added to a larger pile, which will include evidence and proof from numerous other parties. These different parties will have suffered the same or very similar situations with the defective seat belts; they may have been greatly injured from a torn belt or it may never have properly latched. No matter what the choice, your evidence should consist of the following:

– My seat belt failed to work

Remember that you should not reach out to the company for a repair or refund if you have been injured. If you do, your claim will be difficult if not impossible, to proceed with, as the company will claim that you were already fairly reimbursed and covered. You should not have the belt fixed until the lawsuit is settled, as it is the main piece of evidence for your claim. All of this evidence will be compounded with the evidence from other plaintiffs. The benefit of a class action lawsuit is that the evidence against the defendant is generally abundant, leading to a much higher chance of success. Our team of attorneys can get you started and facilitate your entry into the class action lawsuit.

A class action lawsuit against a car company can result in a large settlement or verdict. The only trouble is that the money will be disseminated amongst the numerous plaintiffs. Therefore, if a 10 million dollar verdict is reached, but there are 1,000 individuals taking legal action, everyone would receive only $10,000. This may not be enough to pay off some expenses, while it may be more than enough for others. If you wish to pursue a larger claim that is not shared, you can opt out of the class action lawsuit. We will strive to bring you the maximum compensation available, including coverage for the following:

You should not try to handle your case by yourself. We will be sure to represent you and do all we can to secure you every penny you need. Call (855) 339-8879 to speak with our skilled attorneys for more assistance.

The Firm for You

The Downtown LA Law Group has filed thousands of claims on behalf of clients who have been injured in car accidents or who have been hurt because of defective products, including seat belts. We know the best tactics to winning your claim from the insurance agency, and if we have multiple plaintiffs and a class action lawsuit on our hands, we will be able to speedily and efficiently succeed against the company. Our attorneys are aggressive and experienced, and we will go to court if necessary to defend everyone’s rights.

Call (855) 339-8879 to speak with our law offices for a free legal consultation. You can discuss our case and we will help you understand how a class action claim works. If you wish to hire us, we will give you our zero fee guarantee, which states that we won’t get paid until we win your claim. The company’s insurance agency will be responsible for our legal fees as we take a portion of the settlement. If we do not lose, we won’t take any money whatsoever. For the best legal representation available, call the Downtown LA Law Group today. We will ensure that your class action claim is successful.