What Happens When a Seat Back Fails? 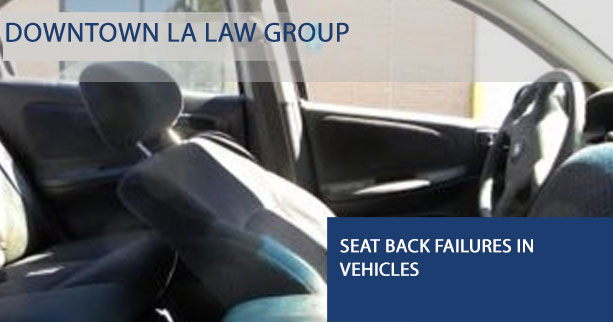 The first thing to understand is that all vehicles must meet federal safety standards before being available for consumers. All vehicles which have been known for seat back failures cleared these regulations. However, the poor designs, poor seat installation, and the use of improper materials can all contribute to seat back failure. Because seats will meet federal guidelines even when these concerning issues are present, many auto manufacturers continue to ignore the safety issue. What really happens when a seat back fails? Seat backs generally fail in rear-end collisions – that is, in the vehicle that was rear-ended. When vehicles are hit from behind, both the driver and passenger seats can collapse (usually backwards). This leaves the occupants of the seats without any form of back support, allowing them to be launched in nearly every direction. Studies have shown that in most cases of seat back failures, the occupants of the seats that failed are likely to be launched backwards into the rear seat area. Of course, this depends on many factors, including the force of the collision – a rear-end collision at 5 miles per hour is less likely to cause a seat back failure than a rear-end collision at 30 miles per hour, for instance.

The Dangers to Drivers and Front Passengers 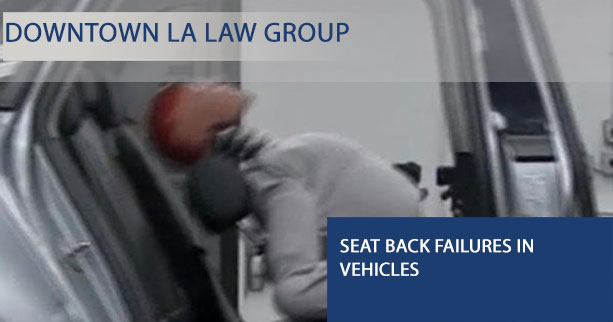 Consider the following hypothetical scenario. An individual is on the way home from work, so he is driving alone. While stopped at a red light, the driver looks in the rearview mirror and realizes that a vehicle is approaching and does not seem to be coming to a stop. Within just a few seconds, the collision occurs. Although the collision did not occur at a high rate of speed, the driver of the rear-ended vehicle sustains critical injuries. The seat back in the vehicle failed against the force of the collision, causing the driver the launch backwards into the rear passenger seats. The individual’s head meets the backs of the rear seats with significant force- the individual sustains a brain injury and a crushing cervical injury. One of the main consequences of the incident is the victim’s paralysis. In this situation, the driver’s seat back failed and severely injured the driver; however, it is also possible for the front passenger’s seat back to fail and severely injure the front passenger.

Failing seat backs do not just pose a severe threat to the occupants in the driver and front passenger seats that can fail, but also to the passengers sitting in the rear seats. One auto manufacturer in particular, after accusations regarding their failing seat backs, claimed that their seats were designed to do just what they were doing. The auto manufacturer claimed that the knees of a rear passenger were supposed to prevent the seat from going all the way back and launching the driver/front-passenger backwards. Regardless of whether this detail is true, auto manufacturers seem to have forgotten that the majority of rear passengers are children – children in car seats, children in booster seats, and children sitting directly on seats. When sitting in the back seat, children – specifically, their face/head – are lower than adults. When seat backs fail, some angles can prove deadly for children. In situations in which the occupant of the failing seat is launched backwards, the back of the driver/front-passenger’s head can collide with the front of the child’s head (when the child is seating directly behind the failing seat). In situations in which the seat simply falls backwards, the highest part of the seat/headrest portion could strike the child’s head. For children, these injuries are often fatal. If children survive, there is a significant risk that the injuries suffered will be permanent and life-changing.

My Seat Back Failed in a Rear-End Car Accident; What Now?

Did your rear-end car accident cause your seat back to fail? Depending on the specific details of the accident, you might have suffered a variety of injuries – injuries that could be life-changing. If there was a rear passenger directly behind the seat back that failed, it is also possible that the occupant of the rear passenger seat suffered severe if not fatal injuries.

Whether you were injured or a member of your family suffered severe, life-changing injuries in an accident that caused seat back failure, you might have grounds to take legal action. Specifically, you might have grounds to take legal action against more than one party. Without a doubt, you could pursue a claim against the party that directly caused your accident. After all, if the driver that rear-ended your vehicle was being reckless or negligent (by texting and driving, driving under the influence, speeding, or ignoring traffic laws for example), he or she should definitely be held accountable. The problem here is that although this party caused the accident, this party did not directly cause your seat back to fail leading to the severe harm suffered. Because of this, the party that directly caused the accident will not likely be found 100% liable for the accident and the harm suffered. However, seat back failures significantly affect the harm caused by even seemingly minor rear-end accidents. Because of this, the auto manufacturers could also be held accountable for the harm resulting from seat back failures. Could manufacturers be liable even if their seat backs met federal requirements? Federal requirements for seat backs are so lax that even banquet chairs can effectively meet them. Auto manufactures often times use weak materials paired with poor designs for their seat backs. In addition to poor seat installation, all these factors could results in seat backs failing – even if the seat backs meet minimum federal requirements. Auto manufacturers are aware of this danger, and they continue to fail to make their seat backs safer. In fact, only a few auto manufacturers have implemented changes to reduce the risk of seat backs failing; all other auto manufacturers continue to ignore the danger. Because auto manufacturers are aware of the risk that their seat backs represent to their consumers and they fail to take any action, auto manufacturers could be held accountable for all the harm caused directly by their failing seat backs. What does this mean? Depending on the specific details of the accident and how you were affected, you could pursue a claim – a claim against the driver that caused your accident and a claim against the auto manufacturer that knowingly put unsafe seat backs in their vehicles. If you would like to learn more about your right to pursue a claim after the harm suffered in a car accident due to a seat back failure, do not hesitate to seek legal assistance as soon as possible.

Were you or a member of your family severely harmed as a result of a seat back failure? Whether the harm occurred in a 2017 Chevrolet Volt or any other vehicle, you might have grounds to take legal action. Undeniably, you could pursue a claim against the party that directly caused the accident; however, you could also sue the auto manufacturer for their defective and failing seat backs. Depending on the specific details of your case and how you and your family were affected, you might be eligible to receive compensation for at least some of the following: medical costs; lost income; pain and suffering; property damage; funeral/burial costs; loss of consortium; punitive damages. If you would like to fight for your right to recover monetary compensation after being harmed due to a seat back failure, do not hesitate to seek legal assistance as soon as possible. You could benefit from the expertise of the lawyers at Downtown L.A. Law Group.

If your seat back failure injuries occurred in a Chevy Volt 2017 or any other vehicle, you could trust our experienced attorneys to effectively handle your claim and guide you towards a successful claim outcome. Contact us today.