Avandia is a pharmaceutical drug manufactured by GlaxoSmithKline approved in 1999 to cure Type 2 diabetes.  According to the United States Food and Drug Administration, Avandia is responsible for over 100,000 heart attack, increases the threat of a heart attack by forty three percent, and doubles the possibility of heart failure after only one year of use. Although GlaxoSmithKline has repeatedly declared that Avandia is both safe and effective, independent studies by the FDA, as well as those financed by the U.S. Senate Finance Committee have strongly suggested otherwise.  Research conducted by the Journal of the American Medical Association (JAMA) discovered that patients on Avandia were far more likely to suffer from a heart attack and other cardiological risks.  In fact, GlaxoSmithKline has been accused of hiding harmful data which indicated that individuals taking Avandia suffered more heart problems than those taking placebos.  A 2010 New York Times article demonstrated that GlaxoSmithKline spent 11 years concealing evidence that proved Avandia to be more dangerous than Actos. GlaxoSmithKline placed the drug Avandia on the market with the clear intent to put profits over patient safety. The drug generates over $3.2 billion dollars year for the company, and they demonstrated extreme resolve in keeping the drug on the market.  Make sure that you are compensated for your damage.

Avandia is a diabetes drug that fall into a group of medications known as thiazolidinediones or glitazones.  Other types of these medications are Rezulin (recalled by the FDA in 2000) and Actos (also linked to serious heart conditions).  Individuals suffering from type II diabetes often cannot produce enough insulin, or their body will not successfully employ the insulin it does create.  Avandia works by making users more sensitive to insulin, allowing them to more effectively manage and sustain safe glucose levels.

GlaxoSmithKline had repeatedly indicated that their clinical trials of Avandia demonstrated only mild side effects such as upper respiratory tract infection, headache, back soreness and fatigue.  Through independent research and patient use, we have discovered that Avandia produces far more harmful side effects. Serious side effects of Avandia include:

For years, Avandia’s manufacturer, GlaxoSmithKline has maliciously withheld potentially damaging evidence of the harmful consequences of the drug.  As a result, users of the drug have suffered from serious heart related injuries, and even death.  To date, over 50,000 Avandia lawsuits have been filed in both state and federal courts.  in 2007, federal Avandia lawsuits were joined in Multidistrict Litigation (MDL) No. 1871, where many cases have settled out of court. GlaxoSmithKline has already paid $60 million to settle 700 cases in May of 2010, and paid another $460 million for about another 10,000 lawsuits soon after .  In 2011, Avandia’s manufacturers settled an additional  5,500 wrongful death claims against the company at an estimated $250 million.  Below is a timeline of past Avandia news, lawsuits,  settlements and claims: 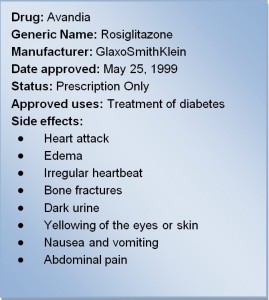 While GlaxoSmithKline has already settled roughly 50,000 defective Avandia lawsuits, the company continues to face additional claims.  in July 2012, GlaxoKlineSmith pled guilty that it did not report hazardous clinical research on Avandia and was forced to pay a $3 billion settlement with the Department of Justice.  Additionally, GlaxoSmithKline has partitioned a $6.4 billion fund to pay for future Avandia litigation and lawsuits.

If you or a loved one has suffered injuries as a result of taking Avandia, you should know your rights.  The personal injury attorneys at Downtown L.A. Law Group are passionate about fighting big pharmaceutical drug companies that needlessly harm innocent and unknowing victims.  Please schedule a free consultation of your rights including receiving compensation for pain and suffering, past and future medical costs, lost wages and loss of earning capacity.