The unsafe drug interaction attorneys at the DTLA Law Group are now accepting cases for the type 2 diabetes drug.  Actos (pioglitazone) was approved by the Food and Drug Administration (FDA) in 1999 to treat Type 2 diabetes. Takeda Pharmaceuticals is the manufacturer of Actos and  is subsidiary of Takeda Pharmaceutical Company Limited, Japan’s largest drug company.  As a result of Takeda’s negligence of Actos’s defective design, manufacturing, and testing, persons who took Actos for more than a year were at increased risk for developing serious injuries including bladder cancer. Thousands of lawsuits have already been filed against Takeda alleging that the makers of Actos failed to warn and concealed their knowledge about the nature and extent of the drug’s risks

Actos is a pharmaceutical drug used to control blood sugar in patients with type 2 diabetes mellitus. It is in the class of drugs known as peroxisome proliferator-activated receptor (PPAR) agonists. The only other drug in this class is Avandia (rosiglitazone). The FDA has no clinical information associating Avandia with bladder cancer in patients receiving that drug. According to the drug maker’s website, Actos works on “two of the common problems that lead to high blood sugar in type 2 diabetes.” 1. Actos allows your body to better utilize the insulin it produces. 2. It prevents the user’s liver from making additional unnecessary sugar When it was first introduced, Takeda hailed Actos as a miraculous cure for type 2 diabetes.  However, patients soon began developing serious side effects as a result of the drug, including heart failure, macular edema, lactic acidosis, bone fractures and in serious instances, bladder cancer.  Takeda continues to market the drug as safe and effective, even in light of FDA and independent studies that Actos increases the risk of serious injuries.

On June 15, 2011, the FDA issued a safety warning indicating that the use of Actos for a period greater than 1 year increases the risk of bladder cancer by over 40%.  The results were part of a 10 year study that that demonstrated elevated risk of bladder cancer, especially for those ingesting higher doses and for a longer period of time. 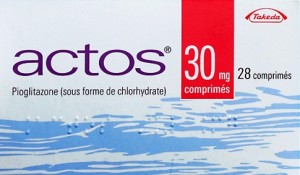 That same year, health officials in France and Germany outlawed the use of Actos based on their own research relating Actos to an enhanced risk of bladder cancer.  Signs and symptoms that user’s of Actos should look for bladder cancer are:

Bladder cancer is responsible for over 14,000 deaths a year in the United States alone, and more than 70,000 individuals will suffer from the disease a year.

In addition to bladder cancer, our Actos Attorneys have noticed that users experience a host of other side effects.  These complications include: Bladder Cancer– According to the most recent findings, patients who used Actos for more than 1 year had forty percent increased risk of bladder cancer. Further studies have shown that the active ingredient in Actos leads to  83% higher risk for bladder cancer in person taking the medication in comparison individuals who had never taken the drug Heart Attack and General Heart Failure – users should be especially cognizant of increased sweating, swelling or breathing issues.

Already, hundreds of patients have filed lawsuits against Takeda as studies have linked Actos to serious and even life threatening injuries including bladder cancer, heart failure and fractured bones.  In July 2012, a U.S. Judicial Panel transferred all federal Actos litigation to a single Louisiana federal court.  This is a centralized federal court known as Multidistrict Litigation (MDL) and assigned number 2299. According to a Bloomberg Businessweek article, the amount of plaintiff’s filing future litigation against Actos’ manufacturer Takeda is estimated to surpass over 100,000 people.  These lawsuits are based in large part to Takeda’s failure to warn it’s patients of the potential risks associated with Actos, most notably bladder cancer.  Takeda counters these accusations with claims that the drug is safe, based on the approval by the FDA.  Worst yet, Takeda continues to stubbornly deny any casual link between their drug and bladder cancer, despite numerous studies to the contrary. Downtown L.A. Law will work with victims adversely affected by the use of Actos to make sure they recover for injuries including past and future medical expenses, pain and suffering and lost income.  Actos is also marketed by U.S. drug manufacturer Eli Lilly & Co., and our attorneys will make sure that they will be held accountable for your injuries.

The Actos lawyers at Downtown L.A. Law Group are currently investigating the use of Actos in treating type 2 diabetes.  Our attorneys are here to talk about your case and provide a free evaluation of your case.  Call us today to speak to an attorney immediately.